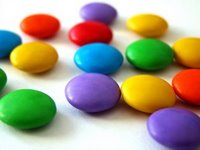 A bitch neglected to follow-up on my experiment in international chocolate-based relations!

Forgive me...blame it on the chocolate.

Margaret of Germany was kind enough to send a bitch a gift of chocolate-based yumminess…and she doesn’t even like Smarties (gasp). Now, a bitch already had some Smartie goodness from a certain Jeremy in Montreal....not much, but some survived my feasting.

Clearly a bitch was going to have to have a taste test. 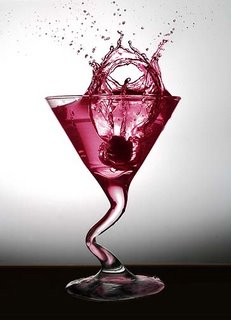 Taking care to indulge in several sips of vodka cran before switching between the two, this bitch was able to detect a slight difference.

Or maybe that was the vodka.

Anyhoo…both are yummy! A bitch is taking some to my voter education class tonight as the prize for answering the most quiz questions correctly.

Off a bitch goes...motivating new voters, one international Smarties filled box at a time…
at March 08, 2006

I like your means of cleansing your palate. If only more wine tasting involved in-between vodka shots...

It is a shame that there are not more voters with Smarties.

You are welcome!!! Let me know when you need a refill. I still need to get to France and get some French Smarties for you.

And more smarties are on the way...

he he he
Jer

Whatever it takes ABB! Teach the unlearned, unlived, and, unknown.

We shall save them together in our zeal!

sista keep it up u had me rolling.

Careful...vodka can mess with your taste buds! (I know since I'm a vodka and tropical fruit juice fan here in Brazil).

I am so glad you cleared your palate with vodka between tastings!

Have you tried the candy coated Hershey Kisses yet? I doubt they'll be as good as your Smarties, but I may go out and buy a bag.