The Great Spring Snow Storm of 2006 turned out to be a slush ridden disappointment for St. Louis.

What can you do?

Let’s just jump right on in… 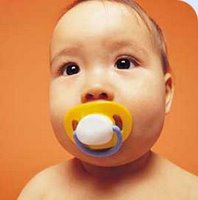 The Adoption Option...
A bitch read this shit with some fascination. It seems that San Francisco’s new Archbishop has asked the local adoption arm of the Catholic Church to 'sync up' with the church when handling their adoption bitness. Basically, no more gay adoptions.

This news reads as if there has been a rush on babies in San Francisco. One would assume that the adoption services arm of the Catholic Church has gotten a wee bit lax in their adherence to church doctrine and needed a slap on the wrist.

Oh, and y'all really need to change your web site. It's totally false advertising! There should be a bigot-based disclaimer...big time. Mayhap someone should sue?

The sad reality is that there are more chil’ren available for adoption than there are prospective adoptive parents…and that’s before you screen out gay and lesbians because you’re a fucking bigot.

A bitch, being a bitch, is curious. Can a Muslim couple adopt from the San Francisco Catholic adoption services? How about a Jewish couple? Pagan? Can a straight single person adopt?

Yeah…went there with bells on (wink).

Or does this bigotry apply only to gays and lesbians?

A bitch is just curious to see how closely y'all intend to adhere to Church doctrine...as it applies to adoption.

Because there’s this oil and water thing going on here between the Church’s wish to promote adoption as an alternative to abortion and their hypocritical as a motherfucker crusade against anything GLBT related.

Of course, the current love affair Americans have with infertility treatments doesn't help matters by solving a problem medically that used to be solved adoptively.

Oh, oh, oh...and the ease with which people can adopt from overseas and/or have a private adoptions doesn't help rally the faithful to adopt domestically either.

So, do y’all have exceptions for Muslims, Jews, Pagans and Protestants?

...but it would also exposes you for the hypocritical Catholic doctrine bending when it suits you pieces of shits that you are.
at March 21, 2006

ooooh girl! I love you when put things together like that! wooohooo! Loved the post. So, shall we bombard the Catholics with 'questions'?

There were so very many reasons that I left that Church seven years ago. The bigotry was only one.

I'd like to know how many Archbishops have adopted a child. Maybe they are afraid they can't pass the child molester screening!

With my own eyes I have seen Catholics do extraordinary work, with great sacrifice, in Africa and the middle east. In fact, I have seen no other group or NGO do better. However, it appears the catholic leaders cannot live up to their own follower's standard of protecting and providing for the innocent and suffering.

I am a Christian, but not a Catholic. I am torn and bewildered. Unfortunately I am forced to love the catholic but condemn the church over this. Which for a Christian makes about as much sense as the Catholic church’s adoption policy. Please forgive my ineptitude. I must castrate myself now.

I'm with you. If Holy Mother Church is gonna bitch about abortion and birth control, they need to chill the fuck out about adoption. Whatever happened to "Jesus loves you?" They've now amended it to be "Jesus loves you...as long as you're straight...and think like us." Fuck that shit.

A kid needs a parent or two who will love them and raise them right. Everything else is just tangential.

(climbing off the soap box now)

Of course, the current love affair Americans have with infertility treatments doesn't help matters by solving a problem medically that used to be solved adoptively.

Amen. I'm always reticent to voice my feelings on infertility treatments, but I don't mean any harm to those going through them, but it always boggles my mind to see how much money, physical and emotional stress people will go through for the chance to be able to have a child of "their own."

"The sad reality is that there are more chil’ren available for adoption than there are prospective adoptive parents…and that’s before you screen out gay and lesbians because you’re a fucking bigot."

"Oh, oh, oh...and the ease with which people can adopt from overseas and/or have a private adoptions doesn't help rally the faithful to adopt domestically either."

Why not bring up the issue of which children get adopted and which do not? The lengths of waiting lists vary predictably with the ages and needs of the children. It is my impression that adopting a healthy baby is difficult, hence the prevalence of overseas adoptions and its risks covered in this article.

San Fran isn't the only place with problems in this regard. The Boston Archdiocese issued a similar decree. Dio Dau has a post and link to the Boston story at www.diogenes-daughter.blogspot.com