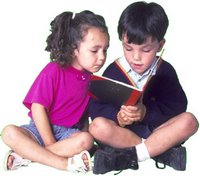 This bitch has some good news to share with y’all! C-Money’s mentee, who is the older sister to my mentee, has dramatically improved her attendance and English grade! Congratulations to C-Money! You are a fantabulous big sister…see, a bitch told you my inability to learn geometry was just a fluke and in no way an indication of your tutoring skills! Since this hard working young mentee is a wee bit too young to read a bitch, formal exclamations of joy and encouragement will be showered upon her tomorrow over ice cream.

Moving forward, empowered as a motherfucker…

A bitch read the news that 1 in 1,000 Americans know the five freedoms guaranteed under the First Amendment with some relief.

Hold it! Catch that knee before it jerks! Catch it, for the love of all that's holy!

This is great news, chil’ren! All this time a bitch has been harboring a secret fear that my fellow Americans understood the freedoms they were willfully handing over to the current administration. Some of these people have jumped up in my comments section to tell a bitch my ass is 'un-American' and 'living in a pre-September 11th world'.

The thought of anyone who understood the freedoms guaranteed to every America actually choosing to flush them down the toilet and ‘trust’ any elected official and his minions made this bitch ill. 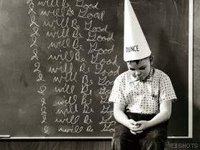 Now, the truth is set before us and it is glorious news!

Americans aren’t willfully handing their freedom over to Satan’s helpmate…they're just ignorant as a motherfucker (special thanks to a certain accurate spelling person for pointing out a bitch's error)! And a bitch thinks the ignorantification (wink) of the American citizenry is part of a vast right wing conspiracy to redefine America in the image of Stalinist Russia.

Think about it...No Child Left Behind, Abstinance Education, the removal of art and music from public school curriculums, the banning of books, the attacking of all intellectuals and the utilization of the power of government to punish political enemies.

These people know that ignorance is the key to their power. A bitch has said it before…an educated voter is a liberal voter! 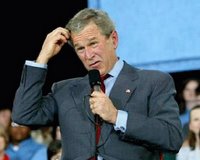 In the spirit of voter education, the freedoms listed in the First Amendment are… freedom of speech, religion, press, assembly and petition for redress of grievances.

Well, golly...those just happen to be some of the same freedoms under attack right now! What do you make of that, Scooter B.?

Noting the 1:1000 ratio it is no wonder people are willing to sacrafice their personal liberty in the "war on terror."

One can't possibly miss something that they don't understand in the first place.

I'm not normally a spelling nazi (well, okay, I'm a recovering one) but "their just ignorant as a motherfucker!" looks bad in print. It should read 'they're.'

Unless it's intentional. In which case, good one! I'll shut up now.

I indeed missed reading you whilst my computer was out of comission.

You did not mention the fact that many people in this poll thought that a "freedom to own pets" was one a part of the 1st amendment. Uh, I heart my pets, but freedom of assembly is kinda more important.

Checking my own self: "...particularly PERTINENT to this post".

Note to self: proofread prior to publishing.

Congrats to both you & C-Money on your work with your tutees!

And I wish I was more shocked by the 1:1000. I am unsure even if they knew - they'd all understand WHY these particular freedoms were important to them and learn from the insights they had over their experiences w/o those freedoms.

I'm in love with your blog. Totally snarky! I'm adding you to my blogroll.

well, i couldn't remember the last of the four, but then it's still early in the morning.

You can't possibly be surprised about the 'study.' It's been obvious for quite some time now that the constitution and its ammendments mean nothing anymore. No one gives a shit. I mean, it's completely ridiculous. As the previous comment says, if people knew about and respected the constitution, the outcome of this current war on terror would be dramatically different.

So, what do you do? I've decided not to hate the people who don't know, but rather fight the institutions that make ignorance the staus quo. I mean, that's all we can do (besides educating ourselves that is).

So, ABB, I'm bringing a new (but old) battle to your doorstep. Presented to me by my blog co-author the Reverend Sandy Mama...check it out please!

This is a scary time in our nation's history. I am completely freaked by our government.

Before you eant against the right wing educational agenda please check out the NEA..they are the ones who have advance the dumbing down of America agenda.....