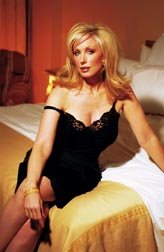 The big to-do is, as always, at Tower Grove Park this weekend. Current weather reports indicate a blessed cool down just in time for the festivities.

This bitch is beyond excited about the parade, which will feature a certain Morgan Fairchild as Grand Marshal.

Shit, a bitch is going to be nostalgic for Falcon Crest...

Briefly rewinding…
Last night this bitch and C-Money watched Frontline on PBS. Fantastically good programming! The show was all about Dick Cheney's seizure of power in the lead up to the Iraq War and a whole bunch of other things too. Let me tell you, watching this show was like watching a soap opera!

If you get the opportunity you should check it out. It has everything…shadow governments, unprecedented Vice Presidential power, secret intelligence operations within various government agencies, good old boys networks, backstabbing, using to power of government to punish political enemies, manipulating data to justify military action…oh, and indictments and resignations and bitter looking photos!

The most amazing this about what went down is how most Americans are still living in a parallel universe where truth is a lie and the lie is the truth…power hungry politicians are patriots and power questioning patriots are cut & run cowards.

Fascinating in a Twilight Zone kind of way.

And then rewinding a wee bit more…
A certain Gatsby’s Ghost and this bitch dined at Five last week for lunch. Five is the newest addition to the Manchester Ave. Grove area. This bitch inhaled a fantabulous grilled chicken sandwich with chips. Not just chips…oh, no these were 'for real' chips, freshly sliced from a potato and fried.

The atmosphere is bistro chic …the staff is beyond polite…the prices are reasonable…but the chips were the shit!

Mayhap a bitch should open up that coffee bar/cupcake & tatter tot diner my ass has always dreamed about…
at June 21, 2006

I also thought it was a brillant if scary program. They are going to have it available to watch online starting on Thursday for those that missed it!!

Happy Pride Week to you, too, from San Francisco!

I've written an article about the Pride Rally, March and Fair Day in Brisbane, Australia, which people seem to like.

If you think it's worth a link, it's here

Happy Pride week to you too ABB! I will be in Chicago this weekend but have a gift for you from Belgium! We'll have to get together soon!

Maybe a 4th of July BBQ?

how hard up was st. louis to have to scrape the barrel for morgan fairchild?

but i should talk. here in NYC, we have some REAL gays as the marshals. how boring. i want a future surreal life castmate as the grand marshal of MY parade...

Happy Pride! The Dearly Beloved and I will be celebrating in Chicago. American Veterans for Equal Rights (AVER) will as always march with color guard and the "GUS" (Great U.S.) Flag - it's as wide as the street, almost half a block long, and we need about 40 volunteers to carry it. Anybody coming to Pride Chicago who wants to march with the gay vets and halp with GUS, we're happy to have you!

Shark-Fu, thanks for your daily bitchiness. My ass needs a wake up call with his morning cup of joe. Please let your readers know that the PBS special can be viewed here:

Oh no you didn't step to darling Morgan (wink)!

Shit...a bitch must be old.

remember in the mid-80s when she starred as DOTTIE in pee-wee's big adventure movie-within-a-movie.

and morgan fairchild ain't nothing. linda evans is my jogging partner. i also got lindsay wagner coming over to polish my silver, as soon as jackie stallone is finished in the kitchen making cranberry jelly.