Beagles, oatmeal eating bears and a very profitable night for Scooter B. and his minions...

Thank you to all y'all who sent a bitch the beagle story! Great stuff. Betsey the sorta-beagle

will be thrilled at the positive beagle-based coverage. Usually beagle stories involve a lost beagle found 400+ miles away 7 years later.

Anyhoo, this bitch was cruising the internets and stumbled upon this story. Since this bitch has always wanted to visit Vancouver this story gave me pause. Bears…oatmeal eating bears…all up in some woman's house.

The most amusing part of this story is that the home owners just let the oatmeal eating bear finish up. Mmmhmm, they just let that bear inhale the rest of his or her oatmeal and then leave!

Well shit, at least it ended well for both bear and human. 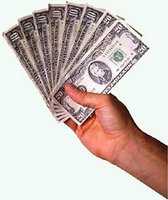 A certain Scooter B. did a little fundraising Monday. Not for a charity…not for refugee relief on the eve of World Refugee Day…not for the hungry that dwell in America’s urban and rural communities…not for the millions without healthcare, the elderly forced to choose between food or meds or anyone in actual need.

Nope, Scooter B. just rustled up $27 million dollars in one night for the Republican Party.

Catch that knee before it jerks! A bitch is well aware that the river of rancid fundraising-based shit flows heavy on the DNC side of the shore.

However, the responsibility that comes with a majority and the hypocrisy of skirting that responsibility while the nation incurs debt, families sacrifice for war and we all shudder under increased military tensions…well, all that increases the depth over on the right bank of that shit river, darlings.

A bitch wishes this presidential ability to rustle up cash could be beneficial to the masses. Yeah, a bitch can just see it…Scooter B., the fundraising genius, in a heroic effort to make up to the American people his damned near criminal squandering of our surplus on meaningless 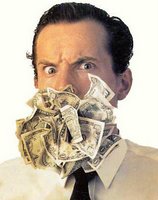 pork and attempts to regulate all things sexual, has decided to dedicate the final year of his Presidency to rustling up cash!

It’s good to know, with the nation at war and soldiers being taken captive and brutally killed…with other soldiers being indicted for murder and alleged war crimes…with North Korea acting a fool and Iran playing understudy…and with Social Security and Immigration reform still unaddressed, that Scooter B. is working hard for the people he really values.

Must be nice to be the beneficiary of the President’s labor!

With a donor database capable of generating that kind of cash in one night, a bitch is certain there won’t be any pesky identity theft scandals on Ken Mehlman’s watch.

Yeah, must be real nice.

How do you go from being the target of a grand jury investigation to the toast of the Neo-Con dinner ciruit. Those with the power must just laugh and laugh as they screw us more and more. Time to wake up children!

I'm in love with those beagles.

So much so that I am distracted beyond having anything substantive to say.

It has always been about the Benjamins', ABB. Waaaaaaay before Jay-Z and Ice Cube made it such, it was always there.

And girl, not for nothin', but if a bear was huffin' down some oatmeal in my kitchen, best believe I'd let it's ass wallow in my hospitality for as long as it wants.

I'd just be grateful someone finally wanted to eat mah cookin'!