Well, a bitch has another day off. My ass woke up early…which is a damned shame…but at least there isn’t anything a bitch has to do today. 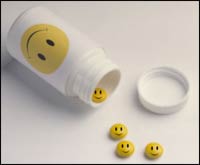 A bitch is beyond excited that Smartie-based yumminess is coming forth from Montreal! Oh, the joy…and the chocolate…and the munch potential.

Shit, a bitch is getting all emotional!

Heaven to hell and back again, withdrawal is no fucking joke.

This bitch has approached the process of quitting smoking with some perspective. A bitch chose to smoke…and a bitch is choosing to quit. There is nothing more annoying than someone who gets all uppity about shit like this. Trust that this bitch has plenty of other debauchereous habits on my list (wink) and they aren't going anywhere anytime soon.

Anyhoo, a bitch was watching CNN this morning. CNN in the morning has turned into a freakfest of awkwardly dismissive interviews followed by wild exclamations over the breaking news of the moment that breaks…and breaks…and breaks until someone wakes up Wolf Blitzer who then announces that the same tired ass sorta-news story has been officially broken and is now 'developing'. To get a basic recap of the sorta-news of the day one has to turn to CNN Headline News.

Gawd, where the fuck is Ted Turner?

So, the CNN Headline News anchor pops up in the screen. A bitch was startled. Shit, this bitch spilled my motherfucking coffee! Mercy, the woman was old-school tanned…the kind of deep bronze that usually requires oil and a serious sun obsession. Her hair was damned near Jean Harlow, so that tan literally jumped out of the television and slapped a bitch!

It took a few minutes, but a bitch eventually overcame her glaring presentation to listen to what she was saying. The Surgeon General announced that second hand smoke is bad for people.

No shit! That is not the kind of shit a bitch needs to hear 72 hours into a quit…assholes. And thanks for all of the blissful smoking footage, CNN. Y’all can go the BLOODY HELL!

And where the fuck are the dermatologists? Huh? Why aren’t they charging up the major

networks over their practice of visually reinforcing society’s bizarre connection between having a tan and looking healthy?

Okay, so a bitch doesn’t tan…on purpose. This bitch has spent my entire life trying to get my natural brownness to be one unified color for a solid month straight.

A bitch just thinks about the sun and my arms get a deeper shade of brown. And don’t get me wrong…a bitch isn’t color struck. My ass just likes my arms and legs to look like they belong on the same body. But even my crazy ass knows that baking in the sun is not the answer.

This past weekend is dawned on a bitch that the tanning season was upon us. Every fourth person at the park was red…nearly red…alarmingly red…or peeling in a reptilian practice that has always grossed this bitch out.

For the record…if the brown appears post third degree burn that isn’t a tan it’s a scar!

It just strikes me as off to have celebrities and news people all pontificating about healthy eating…healthy non-smoking…colon scans and breast cancer screenings…anti-oxidants and obesity…all while sporting the visual proclamation of dangerous sun exposure and discussing diets and pills and all manner of other socially green lighted bad for you shit.

Anyhoo, a bitch recalls one morning when Katie Couric was still on the Today Show. She was going on and on about youth smoking and how she just couldn’t 'get it' why young people think smoking makes them look cool.

It just doesn’t make sense does it?

This bitch is off to the Central West End to sit amongst the masses and breath in some…ummm…pollution while trying to not think about not smoking.
at June 27, 2006

Hang in there, gorgeous. If anybody has the brass to kick th habit, it's you.

A bitch is doing okay and is currently composing a thank you letter to the makers of the Commit lozenge.

Bless them...bless them one and all...

Yeah, TV and the media do a lot of things to encourage people's previously existing addictions. For example, guys are already sex-crazed enough as it is without some hot chick strutting her thing in TV commercials every two minutes... whew.

I feel your pain about the tanning thing, too. My skin has to be the most pale-white skin in existence, and when I'm out in the sun, it doesn't tan-- it turns bright pink.

Ditto all the words of support/faith in you/encouragement from previous posters. Plus, I recommend being super nice to yourself. It is hard beyond words to endure nicotine withdrawl, so please pamper yourself to NO END right now!!

I shall drink a vodka cran in your honor.