ABB's planned discussion with the sorta-gentlemen from Missouri...

Well, the Senate blocked the same-sex marriage ban. Of course they wasted three days on this bullshit…three days of the people’s time...three long days of this bitch's time. 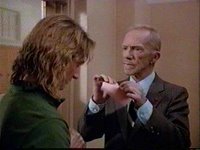 So, a bitch just shot an e-mail off to Senators Talent and Bond requesting my motherfucking three days back!

ABB's planned discussion with the sorta-Gentlemen from Missouri...
You should be prepared to discuss shit like Social Security reform, healthcare reform, why you are both obsessed with who fucks who and when and how they get busy, what national dollars are available to fix Missouri's fucked levee system…why you insist on using language like 'tax cut' when a bitch hasn’t seen a motherfucking dime back…and what, if anything, you have accomplished while in office.

As to all those trips you both take that are paid for by lobbyists. A bitch, being a proud Missourian, is going to erase those distractions right off of your to-do list and free up some time for y’all to take care of the shit you were fucking elected to handle. Don’t give that trip to Grand Cayman another thought (wink)! A bitch will go and represent Missouri…because those trips are all about business, right? Don't worry, a bitch will submit a full and detailed report.

In the meantime, this bitch would like to point out that you do-nothing pandering shits should have been tackling the brewing Iraqi civilian war crime scandal, the theft of over 2.2 million service member's/veteran's identification information, the hemorrhages in Medicaid, the still unaddressed problems with Social Security, the plan that is not a plan on immigration reform, the inconsistency of an administration that pontificates about a culture of life while America has the 2nd worst newborn mortality rate in the developed world and the fact that the nation is stone broke.

I want Bush to get the Amendment passed. Then I want to see his monkey ass demonstrate that it really protects marriage by cutting the divorce rate in half. If he can't do that, then the government needs to give me and all the other fags back every dime of our taxes used to pay for this debate and to subsidize the 1300+ federal benefits strayt folks get when they get hitched. Every "family" discount into a national park, I get a kickback. And I'm going to spend it all on lube, hair products, and designer shoes, in Canada just so my money doesn't get funneled back to those bigoted bastards. This bitch is pissed, and he wants his money back!

you hit the nail right on the head.... They like to discuss topics that are contriversal to keep the mind off of what is really going on...

When you talk to Senator Bond be sure to inquire how, as a divorcee, he protected marriage. Ask him if he remained celibate during the 8 years from when he divorced his first wife in 1994 and married his second in 2002(it is her second marriage, too). If he wasn't celibate, did he have sex with his current wife before they were married during the time they dated in 1996 and 1997?

To complete the inquiry into how Bond is seeking to "protect" marriage, you could go all the way and follow John Aravosis' action alert:

WOW! A vodka-Cran, ton of smarties and a deep breath is what you need! What is this you mentioned about the theft of over 2.2 million service member's/veteran's identification information. I would really like to here more on this topic. As a veteran myself I gotta wonder WTF is this! Danke and Prost to you ABB.

I don't like to say it, but it's reprehensibly for the better that the Republican Congress spend their time on the gay marriage issue. If they don't spend time on this, then they will be forced to carry out their agenda of:

* Spending countless billions on weapons of mass deception/destruction and drive up the debt.

* Pass tax breaks for the millionares of AMerica and pass the cost to the rest of us.

* Discriminate and trash against every non-white, non-European immigrant and citizen in America.

* Continue to make cuts in health care, education, labor, and any program which helps anyone earning less than $100,000 annually.