Okay, a bitch has an announcement!

Take your seats…this is huge.

This bitch is quitting cigs.

Although my ass adores smoking…truly adores it…it is bad for me…gulp…and my ass has to think long term.

Vodka followed by grape cran, however, is still in play!

Have you ever said something you regret? You know, said something in an attempt at humor that blew up in your face, fell completely flat and insulted someone?

How about this...how about saying something insensitive and not at all funny in an attempt at humor during a…say, press conference…when you should have been fucking serious and answered a few questions?

Hmmm, how about that?

Have you ever tried to be funny because you bloody well hate press conferences, the press in general and having to answer to anyone? 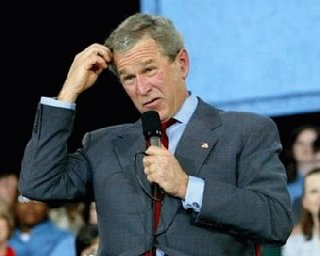 Well then, you have something in common with a certain Scooter B.!

Our President, who has never been one to take a press conference as an opportunity to educate the masses, was downright assholic yesterday…at a press conference he clearly didn’t really want to participate in. In true Scooter B. form, he cracked himself up with lame assed barbs, bizarre nicknames for reporters and all manner of toddler-esque antics.

And then…he launched head first into the land of complete assholes…by poking fun at Los Angeles Times reporter Peter Wallsten for wearing sunglasses, which Scooter B. referred to as shades. You should know that Scooter didn’t let his initial Are you going to ask that question wearing shades? nastification sit. Oh no, he continued to gnaw on the bone, despite the look of absolute horror on most reporters faces. 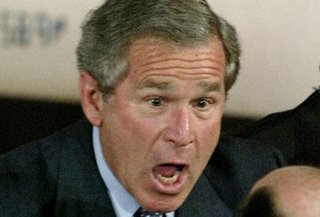 Wallsten wears sunglasses because he has Stargardt's disease, a form of macular degeneration.

Scooter B. has since apologized, stating that he needles the press out of affection.

Wallsten is still waiting for his question about White House credibility in the post Rove CIA leak probe clearance era to be answered.

Good luck quitting smoking. They are about seven bucks a pack here, so I really need to jump on the quitting wagon myself.

Wow...June 30 is my target date! It's a cryin' shame the things taste so good, but you're right. I'm here for support if you need me.

Best of luck to you, ABB. Kudos on chosing your long-term health over the padded pockets or rich corporados who want to keep you addicted.

I second the good luck wishes. I quit (mostly) a few years ago. Try to be patient with yourself. It's a tough process. I'm happy to hear that you are doing it for yourself, not because someone else is bugging the shit out of you.

I hadn't heard about Our Fearfull Leader's most recent idiocy incident. He really cannot utter a sound without making a fool of himself, can he? Amazing.

May you find all the strength and fortitude you might need for quitting. And enjoy the next week and a half. Congratulations - here's to your health.

Yay! Having seen family suffer ill health from smoking I am so glad when anyone quits! Bless you!!!

Quitting cigs is one of the most positive steps I've taken in the past few years & whilst I still occasionally get cravings, I'd never go back, I enjoy my food too much now!

For me, I found it to be sooo much easier than I expected in some respects & much harder in others - big surprise huh? *wink*

I hope the upcoming detoxification goes as well as can be expected - prepare for the onset of 'the black rain' as a friend so charmingly named the process! - And I hope you feel better just as soon as possible.

We're all geared up for some serious bitchitude now you realise!

I quit 9 weeks ago, THIS time. No predictions as to my long term success; I am the living embodiment of the "if you don't succeed in quitting cigarettes, try, try again" method. 19 years of smoking and quitting and smoking and quitting make me an old pro at both, I'm afraid. I have no faith in my ability to STAY quit, so I'll just enjoy and be grateful for these smoke-free days while they're here...

Good, good luck, ABB! Having seen too many older relations decline/die because of smoking-related illnesses, I am glad to see this in your blog.

We'll all be here on the 26th to support you!

i quit 3 years ago and it was the best thing i ever did...