Duck & cover all over again...

This bitch is still trying to recover from the complete lack of shot and awe that a certain Karl Rove is off the hook.

Yep, no shock…oh, and no awe either!

While surfing the internets a bitch stumbled across this shit about American laboratories competing to make a new nuclear bomb. 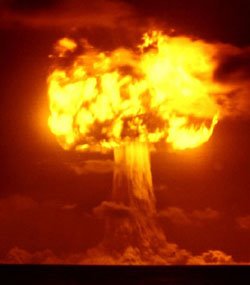 American laboratories are competing to make a new and improved nuclear bomb.

It seems that, while spending the people’s money and indulging in a Congressional pork feast, Congress also approved a new nuclear bomb project as part of a defense spending bill. The new nuclear bomb…which strangely reminds this bitch of the New Coke from back in the day…is being called a reliable replacement warhead.

You’ve got to hand it to them on that one…reliable replacement warhead is fantastical bullshit in action.

This bitch can’t help but wonder about the dual messages being sent out to the world.

Proponents of the new reliable replacement warhead-esque nuclear bomb are pitching that it will, get this, ***clears throat to allow for easy bullshit verbalization*** serve as a strategic deterrent by replacing the multitudes of nuclear bombs we have currently degrading somewhere near you.

Translation to the world…nuclear bombs are strategic deterrents and magnificent fear creating war toys that make everyone take your ass seriously.

Key moment of bullshit…by creating new reliable replacement yet still capable of massive destruction bombs America can get rid of...somehow…our existing bombs, which are degrading, and thus reduce our arsenal!

Critics, forever trapped in the framework of logic a reason, argue that this Build a Better Bomb Game will trigger a new arms race with China and/or Russia while exposing our complete adoration of all things that blow up to nuclear aspiring nations like Iran and North Korea.

Keep in mind that we signed a treaty with a certain Russia in 2002 agreeing to cut our nuclear inventories. So, it appears that we are replacing old eggs with fresh eggs and calling that a reduction.

Who wants to bet on whether Russia takes that twisted new math bullshit laden and flawed logic and runs with it all the way to their own laboratory?

It’s like the 1950s are breaking out all over the place!

...and then suddenly, the Earth was peaceful for tens of thousands of years...

...and the next "world war" was fought with sticks and stones...

Does this mean A Bitch can resume her dream-based applications of the Rod of Correction to the netheh regions of the Prince of (Semi-)Darkness?

PS: ABB, I hope one day to procure Photoshop... can you see what a double-threat you and I could become? You create these fab visions with your dream-based applications... and I can provide the visual graphics:) Good times!

Cranky Prof...Hmmm, mayhap a bitch has been inspired.

Maven...we would so rule the world, as it was meant to be!

Scooter, Rummy and their dick boss...err...boss, Dick are demanding some non-nuclear but equally devastating toys: spaced based weapon platforms and re-arming ICBMs with non-nuclear warheads.

US insists on right to develop arms for outer space
The United States on Tuesday reasserted its right to develop weapons for use in outer space to protect its military and commercial satellites and ruled out any global negotiations on a new treaty to limit them.

In a speech to the Conference on Disarmament, a senior State Department arms control official insisted that such weapons systems would be purely defensive.

Washington sees no need for negotiations to prevent an arms race in space as a 40-year-old international treaty banning weapons of mass destruction in space remains adequate, he said.

Of course this is straight out of the The Project for the New American Century playbook (synopsis here via The Information Clearing House):
The fundamental essence of PNAC's ideology can be found in a White Paper produced in September of 2000 entitled "Rebuilding America's Defenses: Strategy, Forces and Resources for a New Century." In it, PNAC outlines what is required of America to create the global empire they envision.

According to PNAC, America must:

* Reposition permanently based forces to Southern Europe, Southeast Asia and the Middle East;
* Modernize U.S. forces, including enhancing our fighter aircraft, submarine and surface fleet capabilities;
* Develop and deploy a global missile defense system, and develop a strategic dominance of space;
* Control the "International Commons" of cyberspace;
* Increase defense spending to a minimum of 3.8 percent of gross domestic product, up from the 3 percent currently spent.

The Pentagon has asked Congress to approve a five-year, half-billion dollar plan to put non-nuclear warheads on two of a Trident submarine's Trident II missiles _ while the sub's other missiles still carry nuclear payloads. The idea is that this is the best _ perhaps the only _ way of striking with a non-nuclear warhead if time is urgent. For example, if U.S. intelligence gets word that al Qaeda has a nuclear bomb and is about to move it from a place where it can be targeted to someplace where it might not be detected again until it strikes America's homeland.

Advocates say only the submarine-launched missiles hold the potential to be close enough to targets to strike in less than one hour.

Critics caution that the world's other nuclear nations (Russia most likely, China possibly) have sufficient technology to see that a nuclear-capable missile has been launched from a nuclear-armed Trident submarine. They might believe a U.S. nuclear first strike is underway. Even though it is a non-nuclear warhead.