Momma said knock you out!

Jumping right in with gloves on...

An episode of Dynasty has broken out on The View this week. Drama is back on the scene as a certain Star

Jones and divalicious Barbara Walters go toe to toe over who said what to whom and how they said it and whether it was a betrayal and who betrayed who and how and why the other is a backstabbing ungrateful little shit!

Holy mother of all things!

My initial reaction was horror….which was quickly replaced by shock and awe.

Okay, so Star Jones lost her motherfucking mind when she got engaged…and negotiated sponsorship of everything wedding related as if her wedding where the Super Bowl and the World Cup all wrapped up in one package. That was some tacky assed shit. Sorry people, but that was the very definition of tacky.

Shit, she should have sold tickets. 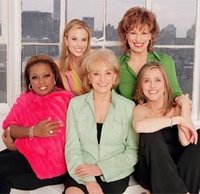 Ratings where high for the shows where Star Jones Reynolds plugged her wedding sponsorship. Producers were peeved that Mrs. Reynolds was using The View to polish off her personal sponsorship agreements and allegedly fretted over whether ratings were high as in 'Jerry Springer trainwreck viewage' high or high as in 'isn’t Star great' high.

Fast forward to the main event.

The View announces that Rosie O’Donnell will be joining the show next season. Immediately speculation ignites that Star Jones Reynolds must be leaving because Rosie and Star don’t get along…can’t stand each other…are like oil and water…mmmhmmm, think Joan Crawford and Bette Davis.

Specualtion and no confirmation. 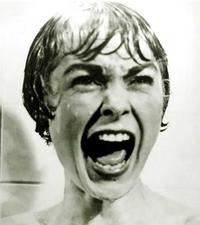 Apparently, Star Jones Reynolds was told her contract wouldn’t be renewed…the announcement was due sometime this week…and she decided to be the mistress of her own destiny and announce that shit on her own.

Without telling her co-hosts!

Lawd, have mercy! Did y’all see the look on Barbara Walters’ face?

But wait. Hold up! Barbara Walters hasn’t been in the bitness for 375 years because she’s merely charming. Behold the original news-based diva in action, chil'ren! 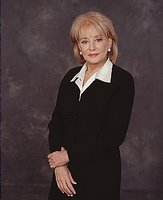 Babs made her move immediately following the show. Clearly she went to town on the producers, because Star Jones Reynolds was erased from all things The View related in a move remenicent of Stalin post purge.

Her name in the credits…no where to be found.

Her check…in the mail, honey.

Then Babs came out with a surprise left on The View yesterday. Someone took a note from a certain Debbie Reynolds’ How to Spin a Bad Breakup playbook. Much like Debbie Reynolds post Elizabeth Taylor/Eddie Fisher scandal, Babs Walters took a serious tone when announcing that Star was no longer on the show. She neatly severed the cord all the while adding bits of verbal poison to the mix.

Star knew for months that ABC didn’t want her anymore.

We were trying to give her time to find other employment.

We had hoped to be decent about this, but Star chose a different path.

I wish her all the best.

But we simply couldn’t pretend that everything was the same at this table. (Fantabulous line, by the way.)

Not only is Star going to hold court for a full hour, but she is doing it through the one on one interview technique that Barbara Walters made famous on 20/20!

Oh…oh, oh….that is brilliant…so brilliant that it may be worthy of double diva backstab goal score-like point.

I had no clue that Rosie and Star didn't get along. One has to wonder what really did happen there. Did she get forced to resign? Or did she quit willingly?

I watched that bizarre resignation clip from the View, and it was terribly weird watching Star spin it as a "come together and hold hands with me!" moment. She's struggled over it, her heart tells her, she thinks she might cry, etc. Then when she tries to go back to the "news," Babs, using her very sweetest "of course I love you" voice, says no way they're doing the "news" now. Fantastic.

I kind of had a feeling people were mad at Star Jones because she got married and lost weight. It's sad. I always liked her. My size 8, married, traitor ass always liked her. I am sorry to see her having such a rough time, and hope she gets through it alright.

I think the feud between Star and Rosie came because Star was denying having gastric bypass surgery, and Rosie was like, there's NO WAY she didn't have it.

Why is everybody fighting? You know how the children hate it when they fight.

yanno...Star is just better than all this

All this drama stuff would be beneath her, of course methinks i set the bar too high for ole girl.

See, I thought it was just the network not renewing her contract due to poor ratings or something of that sort... and Star has known since April, I believe. I think the reason why she did what she did was because Babs didn't have the stones to tell her, herself... but the contract was with ABC, not with Babs... so who knows what the real scoop is?

Anyway... here's a link on Youtube... someone video'd their t.v. as Star was making her arrividierci:

Hhmmm Can't wait to see her on Larry King. Fighting with Babs in not a good look, I'd like to see who is going to hire her now.

The only person that can help her is Oprah but I don't even think O likes her.

Thanks for the play by play action. It is too bad that Star didn't do a song and dance number like Connie Chung on her last day.

I watched the clip. Star was cool. She didn't call anyone names. So Babbs is bent out of shape because she took a little thunder and announced it off schedule. What the hell ever.

I'm more interested to see Rosie fall on her ass next season. And I'm a lover of some chubby, soft butchie, 40 something, gay girls. I just think that woman is unstable and I hate she has the voice for my demographic.

Oh, my God...this is awesome. I don't follow The View, so I had no idea about any of this, but it's been too long since we had a decent celebrity feud.

I can't stand the chick(Star that is) and never could. And you know she had it stapled shut to get rid of the "fattie girls" (But sheeee-it...its easier than exercising cause though I go, I hate the muufucca)

However, I'm pulling out my black card on this one. They did homegirl dirty and I hope she made that old hag look like the bitter beeatch she is.

Regardless of her race, appearance, or her shoe size, Starzilla was HIGHLY UNPROFESSIONAL all the way from the day she met Big Gay Al up to the minute she got booted. I can't think of any other employer that would condone her crappy-assed behavior for as long as ABC did. She deserved to get canned a year ago during the wedding kerfuffle. I will not miss her for one nanosecond. Good riddance!!

Star Jones Reynolds is gone? What!