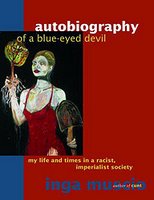 This bitch is currently enjoying a book sent as a gift, Autobiography of a Blue-Eyed Devil by Inga Muscio. Very stimulating…very, very stimulating! A bitch is getting fired up!

Reconstruction…
A bitch caught some good programming on PBS this month. They aired several shows in honor of Black History Month and this bitch was particularly interested in Reconstruction, Jesse James and the St. Louis World's Fair. This bitch, being a Missouri raised bitch, has long heard the tale of Jesse James from his numerous ‘relations’ scattered about the state. Apparently Jesse was a wee bit of a rascal about town…if you know what a bitch means (wink). Although Missouri adores Jesse James, most references to him leave out his passionate support of the Confederacy, membership in the violent Missouri insurgency and general refusal to surrender after the Union was preserved. Oh…and they leave out his family's ownership of slaves too.

Thankfully, PBS decided to tackle the Jesse James myth and the reasons folks hold on to it like a life-line. 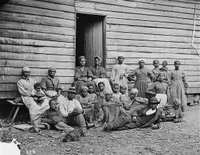 Anyhoo…Reconstruction aired first. Y'all should have seen the amazing pictures featured in this segment! A bitch couldn’t help but think of the Gulf region after Katrina. Jesus, Katrina swept through the Gulf like Sherman on his merciless march and this bitch couldn’t get those dual images out of my mind. 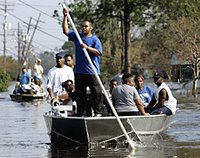 And what to make of the latest reconstruction effort. Seems like the same elements are in play. The current administration does not wish to crush the Gulf, but they also do not want to reward the region for willfully standing them down during the post hurricane debacle. Added to that, is the ability to rebuild in their image…a new Gulf region reflecting the Gulf as outsiders would prefer to see it. Which is pretty close to what went down after the Civil War, and that shit only served to pour salt in those southern wounds and reinforce distrust for the whole process.

Mmmhmmm…which brings me to Jesse James.

See, Jesse was a border raised Missouri boy to his core. He was pro-slavery, pro-Confederacy…his values and beliefs solidified by the Missouri/Kansas Border War. As most Missourians know, we owe much of our present inability to move beyond to the racial and political divides of the Civil War to our states unique style of Civil War expression…guerilla, militant and brutal to the point of nastification.

Example - after slaying 100 unarmed union soldiers then removing their scalps, genitals and ears…well, it’s a wee bit hard to make nice a few years down the road.

So, regions of Missouri sob over their Civil War battle fields and honor Confederate Remembrance Day and the ‘big cities’ cast desperate eyes to the Devine One and pray that ‘those people’ wake up and realize this war is beyond done…been done…DONE! For the love of Gawd...DONE!

Jesse never gave up the war. An interesting component of Missouri’s inability to get with the program was the post Civil War disenfranchisement of pro-Confederacy loyalists. Some people were relocated in an attempt to break up insurgent connections and many lost the right to vote during Reconstruction. As a result, these disenfranchised people witnessed Reconstruction…they didn’t participate in it. And they wanted ‘their’ Missouri back. 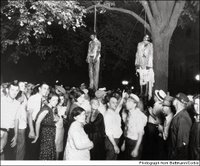 Lynching…intimidation….segregation and racial tensions lay in the wake of Reconstruction in Missouri. Clearly, Jesse wasn’t alone in his barely controlled fury over a defeated south. The fire was never really put out…embers long tended were easily stirred to flame and Missouri...hell, America...hasn’t been truly united since.


Which brings a bitch to the final show my ass watched this month on PBS…The St. Louis World’s Fair documentary. Specifically, the segment addressing the issue of segregation at the Fair…our Fair…that motherfucking 1904 World's Fair that St. Louis still gets misty about.

Fair attendance was segregated…'negro day' was handled with mixed results, since several vendors refused to serve blacks for fear of loosing white business. One of our city's greatest achievements…like so many parts of the city, built in part with minority labor and participation…became a demonstration of our city's greatest failure.

This bitch watched some good shit on PBS this month. Now, as Black History Month comes to an end and the media begs American to remember that the Gulf was hit by a hurricane, all this bitch can do is shudder and sigh.

The challenges are so similar…to reconstruct, heal and revitalize. This time the ingredients appear less volatile, yet the residue of injustice unaddressed still coats our victory pan.

And will our nation turn away…just like before…exhausted by the struggle, discouraged by the distance yet to walk and desperate for denial.

Will this new reconstruction remain half-baked in a forgotten cold oven, within the dirty kitchen of America's house still divided?
at February 27, 2006

I bought that Inga Muscio book as well! Cannot wait to dig into it! Have so many things on my reading list, wasn't sure which I should dive into!

Perhaps if a few more readers, of either your blog or mine, could do a reading circle?

Muscio rocks, babe! Did you read, "Cunt: A Declaration of Independence?"

I haven't ever thought much about Missouri as a border state before, and didn't know the depth of the problems there. But suddenly my great-grandfather's awful predjudaces make more sense...his family came first from Virginia, where they owned slaves, and then spent a few generations in Missouri, before finally coming to CA. When I try to talk to my grandmother about her racist beliefs, she says she can only come so far, because of who her parents were. And because her grandfather on the other side died in the civil war, fighting for the Union Cause, she blames all black people. She doesn't even think of the people who her southern ancestors enslaved as an issue to consider. Ugh. I'm turning blue in the face from talking to her about it.

Which of course makes no sense. My mother overcame her family's racism, and so did her sister, and so on. Maybe it's a combination of the family and the age in which you live. And of course the willingness has to be there. But it's painful.

My generation, I'm pleased to say, has made great strides in making my grandmother open her eyes at least a little bit...out of six grandchildren, two are lesbian, two are in interracial relationships, one is just trash (but only has children with white men, for whatever that's worth to my grandma), and one (my brother) is 'normal', meaning he married a white woman. So we're working on her.

Hi ABB, did you happen to see the African-American Lives shows on tracing family history. I watched with my mother, it was riveting and exciting- especially at the end when they showed the results of DNA testing, linking Oprah and Whoopies and the others to specific places in Africa.

Hey sis! When you have a spare moment, check out my latest creation at
http://michigamuaexposed.blogspot.com
It is a budding chronicle of a protest I was involved in back in 2000 at the University of Michigan and is illustrative of the institutionalized racism that abounds.

much love! sorry I missed your b-day!

Great post! As a transplant to Missouri – I found the whole Civil War/Confederacy obsession strange - the war is long over, pull down that flag. Racism however was something that I was familiar with. The lynching picture that you used, that most people use, is from my hometown, Marion, Indiana. You’re probably familiar with the story. Reading the book “A Lynching in the Heartland: Race and Memory in America” was a powerful experience, having grown up there, and knowing some of the figures and their families involved. Just goes to show you that even in states that were clearly in the “North,” terrible things happened and continue.