A bitch reads it for the articles... 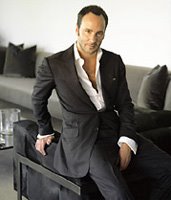 Okay, so a bitch finally received my naked ass Vanity Fair. Honest…there are naked women on the cover…naked Hollywood actors…oh, and a fully clothed Tom Ford.

A bitch was already prepared for this shit, having received one too many visits to this blog from Google surfing people trying to get a look at naked women on the cover of Vanity Fair. Somehow, a bitch posted about Vanity Fair and a certain Hollywood actor and Google did its thang…oh, fuck it. No, there are no naked Vanity Fair pictures here!

Tom Ford is fully clothed, which is noteworthy because a bitch thought he was all about being naked these days (wink). And the women are naked. Apparently, this was Mr. Ford’s vision of

Hollywood…and a certain Graydon Carter of the Vanity Fair editing Graydon Carters was all for handing over this shit to Tom Ford…even the decision to keep a certain ass crack in, which Tom Ford specifically requested via yellow post-it.

Oh, Graydon! Shame on you.

A bitch was most disturbed by the fierce odor coming out of my Vanity Fair. Since it was wrapped in plastic when it finally made it to my door, a bitch was pretty sure it hadn’t been opened. Yet, it smelled like someone had mixed White Shoulders and Opium in one bottle then tossed in some ripe ass to spice it up. Lawd, it made my eyes water. One of those perfume advertisers lost their motherfucking mind! It’s bad enough to leak scent within my magazine, but to leak nastified scent is going too far.

Anyway, the thing about these pictures is that a bitch can’t understand what the fuck they have to do with Hollywood, acting or the work these women did this past year. Oh, and why is Tom Ford in there trying to get in where he fits in? Get naked if you want to, ladies...whatever…but someone in the room should have questioned the relevance of this move.

Long ago, these type of career decisions involved a shady manager, several bottles of 'dolls' and martinis...lots of martinis.

Or did y’all simply fold to Tom Ford’s will like Graydon dearest did?

A bitch could have lived a lifetime without dipping into Tom Ford’s fantasies. They were at once so very 'dirty old man' and yet so typically Victorian. Did someone read Fanny Hill recently, darling?

And Graydon? Talk about expanding readership! Hef better watch his back (wink)…
at February 28, 2006

The sistas at salon/broadsheet had their 2c to share about this cover, too:
http://www.salon.com/mwt/feature/2006/02/14/tom_ford/index.html

I had read that there was originally a third actress scheduled to be in this photo, but she (wisely) backed out at the last moment. And THAT is supposedly why Tom Ford is there. But I think he shoulda been nekkid, too.

ABB - Mirror mirror on the wall, who's the fiercest of them all? ABB, goddamnit!

oh, love the addition of pics by the way, VERY NICE! hope you are well and tell CRYSTAL boadwee blog says hello.

p.s. did you get a hater on your blog? notice my comment had to be approved. i had a hater/stalker for a while but the motherfucker finally went away and i was able to open my comments up again. anyway, tell a bitch who posts negatively about a bitch will get a bitch's ass kicked by a bitch's blog brigade. 'nuf said.

I believe the third actress was Rachel McAdams. She wasn't notified until she got to the shoot that she was supposed to be naked. Blarf.

ABB, I just found your site recently, and I'm currently working my way through your archives because you rock.

Those pale broads look straight nasty. Was I the only ones distured by their actual images?