A bitch was struggling to wake the hell up this morning…nursing my first cup of coffee like it was the elixir of life, for the love of all that’s caffeinated…when news broke that the FBI has finally identified a suspect in the anthrax mailing case.

And that the suspect they have identified killed himself before they could bring him to justice.

Let me see if I've got this shit right.

Former Attorney General Ashcroft (shudder then cross thyself) publicly identified Steven Hatfill as a "person of interest" in the anthrax case and then the FBI investigated Hatfill like a dawg on a meat-based bone only to turn around and settle with the man (using the people’s money, mind you!!) for millions of dollars because he was the wrong dude even though they wouldn't just say that he was the wrong dude...and now they announce that they have the real culprit and were fixin' to go for the death penalty but that he killed himself before they could take his ass into custody.

Is that really how they’re going to end this shit?!? 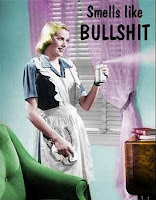 ***sniff followed by sniff and another sniff***

A bitch detects the stank of bullshit.

FBI Director Robert Mueller told CNN last month that progress had been made on the case and he was confident it would be resolved. So the FBI knew who the fuck they were allegedly going to take down for this shit in July.

The man they are now claiming was behind the anthrax mailings (not to be confused with the man they spent years claiming was the man behind the anthrax mailing then paid off after realizing he wasn’t the man behind that shit after all) apparently lived and worked in Maryland…which is damn close to where the FBI lives. So, it is not as if the FBI had to travel far and wide to find the guy.

Ummm…so, why the fuck was the man behind a terror attack who worked at Fort Detrick (Lawd, give me strength) allowed to roam free, gather up meds or a weapon and allegedly kill himself after being made aware he was the new person of interest in this case but not arrested even though they are now acting as if the fucking case is solved?

I call bullshit on this tidy as a motherfucker and too perfectly wrapped up to be the damned truth tale until further information comes forth!

Shit, The Man lost the presumption of competence in this case long ago…

…and any dawg owner can tell you, where there’s stank there’s usually shit.
at August 01, 2008

The whole thing sounds fishy to me too.

Yep, I'm with you on this one sweetie. This is that strong shit that you can smell for 20 miles down the highway.

They'll call it case solved now and give each other slaps on the back along with a hefty round of big pay raises and promotions for all involved.

if it smells like bullshit- it probably is. and the fbi has stepped all in it. all up in it. stinks.

Just another convenient death. Nothing to see here, citizen. Move along.

Oh hell yes, the stench of bullshit is heavy on this one Shark Fu.

I thought the same damn thing when I heard it on the radio. Sounds like an assassination parting gift from this administration to me. But, oh well, right? The Bad Men Are Gone, and we can all rest peacefully to the dulcet songs of the crickets...

Hmmmm -- I just tuned into the NPR coverage of this earlier today as I was running errands -- and even though I only heard a snippet, I thought: "That ain't right."

There was a story over a year ago where a federal DA from Florida was caught up in a child-sex sting. He "committed suicide" in his jail cell before his arraignment, and there was so little coverage of it that I've always wondered. It was just before the whole Dept of Justice thing unfolded in DC, and honestly, I've always thought that something weird was going on there.

Thank you for helping me listen to my gut.

Seriously, this seems like only the tip of a very scary iceberg. Our govt. is up to some insane shit and I fear this is hardly the worst of it. Hopefully karma does its thing and it all comes out eventually. How many days left of this administration?