Lifetime Network just released some poll results from their "Every Woman Counts" campaign which is supposed to get more women engaged in politics.

A bitch is all for more folks getting involved in politics...

...but Reuters has earned a session with this bitch and my Merciless Rod of Correction for the way they are covering those results!

Not for the article by Claudia Parsons that actually details the results of the Lifetime Network poll.

Uh uh, Reuters shall face the rod for selecting the following result for the title for Ms. Parson’s article piece about those poll results…

More women want to carpool with Obama than McCain 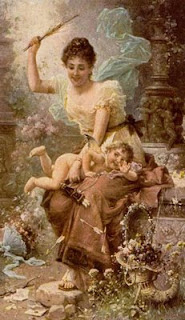 Well, golly gee Reuters!
Thanks a bunch for presenting those daunting poll results in a way that we woman folk can understand!

Oh and hugs plus kisses to you, Reuters, for helping society better understand how women voters think and what matters to us.

Oh, I understand that such questions often help poll addicts get their fix...umm, err...speculate over how voters really see candidates or why voters like one person over the other.

But damn it all to hell, slapping that shit up as the title is just…ugh.

Huh. I actually WOULD rather carpool with Obama than McCain! I'd say that poll accurately represents me, anyway... Lord have mercy.

I saw this damned poll and wanted to push the monitor off my desk.

Thanks heaps, Reuters for that insipid little tid bit.

People who vote for McCain would not want to carpool anyway, they limit one adult to HumVee.

I've been considering keeping a file of and then doing a post on stupid main stream news headlines. It's amazing the ignorant, simple minded, bigoted things they come up with.
But my question is: why do only bad guys get the SharkFu meciless rod of correction. I've been bad. . . . me next Black Lady, me next!

Seriously. Politics don't even enter into it, because you just know John "What is this E-mail stuff you whippersnappers keep referring to?" McCain would be tooling down the left lane at twenty miles under the speed limit with his blinker on.

Stupid headlines like this are part of an effort to keep issues out of the campaign, because the public is to the left of both McCain and Obama on most economic issues.

Forget about who I want to vote for...it's all about who will help me take the kids to soccer practice!

Thanks for the informative post! (It made me think far more than that article did)

The article was written by a woman too...interesting no?

I am very tired...and didn't finish my thought...er, comment.

Either Claudia didn't object to the eye-grabbing title, or she has little control over what her employer uses to publicize her piece.

I just wonder which it is.

FYI dusty: Generally speaking in the world of journalism, and this almost certainly would apply to the major news agencies as well, journalists write the stories with a proposed headline, and editors edit the story and usually come up with a headline they like better. It is quite rare to see a headline written by the journalist themselves, even serious comment and analysis pieces are often re-headlined.

What a load of crap! Why would I want to carpool with a guy who hides his middle name?

All part of the Taqiyya I suppose?

Only the stupid are going to vote for Barak HUSSEIN Obama, the most left-wing Senator of all.

This guy is too liberal to run Canada, much less the USA.

And he doesn't take a stand against islam either..

I doubt this will make it past the censor.

Libs like to only have their own opinions heard.

Oh yea of little faith...
Sometimes I've got to let some bullshit through to remind the flock why we must struggle against the forces of religious hatred and fear...and that a mind is still a terrible thing to waste.

Get thee gone from this place of thought, knavish fool!