Ahh, the joy of driving sassified people to get their vote on

Not only is voting a necessary part of renewing my license to practice the fine art of bitchitude (wink), but it is also an opportunity for this bitch to hang out with my Voter Education students as I drive their sassified selves to the polls.
ABB's Vote-based Field Report - Shift #1...
Picked up Voter Education students at the shelter and was greeted by a festival of fussing over who was going to get to ride in the front seat.
A bitch went off after 3 minutes of that mess and sounded freakishly like my mother (shudder). 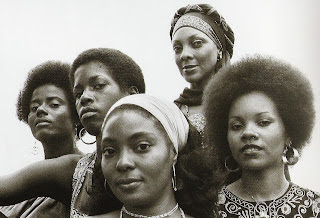 Obviously amused students entered Miss Sister Girl Cabrio then proceeded to have giggle fits all the way to the elementary school where they then got their vote on without incident. Upon exiting the school said Voter Educations students indulged in another festival of fussing over who was going to get to ride in the front seat on the way back to the shelter.
A bitch went off…again.
This resulted in another round of giggle fits and eventually a bitch joined in on that shit. Upon arriving back at the shelter my students announced…

“Ms. Shark-Fu that was fun! You crazy! Let’s do it again next week!”

Mercy.
A bitch is exhausted and I’ve got three more of these cab-esque trips to do today!

***logs off whilst sending thanks to the Divine One that elections are not a weekly thang***
at August 05, 2008

I honor your commitment and service to your community.
Blogging is like preaching to the choir, getting out there like you do is making a difference.

And I must figure out how to do the same...it takes such a small amount of effort, but the payoff is huge indeed. Will I be able to encourage people like you? I so want to..

Thank you for putting a smile on my worn down face today. ;)

Ha ha ha ha ha ha. I can hear it now - "Don't make me come back there! If you don't sit DOWN and sut UP I swear to God I will turn this car around and nobody will get to go vote today! I mean it!"

Dear Lord, give me the wisdom to discern your path for me, and the strength to NOT sound just like my parents as I walk along it...

Cheers and best wishes on your students' Big Day.

But I know u must be proud though

What you do is so wonderful.

I know it's Ohio and not Missouri, but still, those Diebold machines are used lots of places and I thought you might like to know.