Pondering the American Idolization of the news...

A bitch woke up early, which was surprising since my ass inhaled three apple martinis last night at Van Goghz during the Cocktails for Life event.

Anyway, this bitch caught the full news cycle this morning. Amazingly, every news channel was 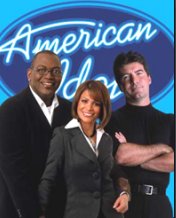 covering the latest American Idol faux-drama as if it were the fall of the Berlin Wall! Since a bitch is one of the few people in the nation who has never really watched American Idol, watching the coverage was a bizarre experience. Anchors weighed in about the contestants…using first names only, as if everyone watching just had to know who the fuck they were talking about…and assuming that the brilliant marketing manipulation of American Idol was the 'it' story of the day.

This bitch was more interested in a briefly mentioned…so briefly mentioned that it almost didn’t register…so not considered important news that CNN’s O’Brien duo floated over it without a murmur or a pause…ummm minified news item about America negotiating peace with North Korea.

This policy u-turn...apparent flip flop...total about face in the midst of our global struggle against nuclearized terror didn't stand a chance when put up against the detailed analysis of the recent American Idol vote.

As most people know, America and North Korea did not reach a pax diplomatica to end the Korean War but an armistice. That armistice, signed in 1953, has shaped our relationship with North Korea.

In short, we have been playing the ‘don’t blink first’ game since 1953.

In his first term as President, Scooter B. turned up the heat on North Korea in part due to their emergence as a nuclear power. In fact, Scooter B. stated that North Korea was one of the three most dangerous nations in the world and that America would not tolerate a nuclear North Korea. North Korea responded with overtures for America to…well, kiss its isolated ass so the tension grew.

America has focused on the global threat of those nukes and it seems that we are attempting to leverage the economic/diplomatic benfits of peace, which North Korea has been pushing for, to bring them to the nuclear etiquette negotiation table one more time.

Here we are…apparently on the brink of peace with North Korea…and the American people are more informed of the nuances of American Idol than what their government has put on the table in exchange for peace with, to use Scooter B.’s term, one of those Axis of Evil nations.

Is Paula Abdul loosing her mind?

How close was the vote on American Idol last night?

What is the nature of North Korea’s nuclear program…how many people may be starving to death within its borders…are there really termination camps and forced labor camps…do they really have a policy of generational punishment for political enemies?

What is being done in our name, negotiated on our behalf and promised for our future?

At what price does the media indulge in multiple and very detailed star fucking sessions with the reality television creations on America Idol?

Or maybe international policy brokers should adopt the American Idol model? They could dress up, sing their policy statements and have folks call in and vote for the one they like best!

Why the hell not?

Shit, the average asshole on the street can tell you who Carrie Underwood is…but they probably think Kim Jong Il is that guy who butchered She Bang a few seasons ago on American fucking Idol.

A bitch wonders if that isn't the desired outcome...in which case, my ass should mention that Tuesday is Soylent Green day.
at May 18, 2006

The other thing I hate about the American Idol phenomena is that it makes voting seem like a trivial matter. People become subdued because we can vote on everything in pop culture, but ultimately nothing of really substantive value in our government.

I didn't watch the news, but AI sure seems to be the news of the day. Scary, when there is so much more, really important stuff going on.

American (false) Idol: the new opiate of the masses. Jesus is gonna be pissed!

I used to think distracting people from real issues was just a side effect of unlimited access to mind-numbing entertainment, but over the years I've come to believe that it's very much intentional. Sort of our version of bread and circuses, except you don't have to actually get up off the couch and go down to the coliseum to see it.

Ditto Gay Prof, because I hate that no one votes for what matters but rush to their cell phones to vote for the next American Idol.

Question, dear Shark-fu: What do you think of Van Goghz? The name irks me, but I've heard some good things.

A bitch likes the vibe at Van Goghz. It feels like a neighborhood bar and they throw down a damned good martini.

AMP is more of my kind of steady haunt, but Van Goghz is cool to toss into the mix.

Sadly the news is all about ratings and profit. Thus they show American Idol ad nauseum because that millions of people watch it.

Girl, I love reading your posts-you are two kinds of crazy.

i've never watched american idol. i don't see the obsession with it to tell you the truth.

The thing about the "voting" on American Idol doesn't really resemble voting as we know it. People use speed dial to "vote" repeatedly. If too many people "vote" by phone from a particular area the phone system crashes and all of those "votes" are lost. And I think you have to pay for each "vote" that you dial in.

This type of fake news coverage is what makes so many of us turn from the mainstream media to other news sources.

Do you know you can get an american idol coin which will feature 2 finalists on 2 sides? Well, I got mine from americanidolcoin.com.

Count me in as one more person who has never watched American Idol.

I can't help but wonder if the reason North Korea can have nukes according to Scooter B is that they don't have vast reserves of oil. Seems like Scooter and his buddies can't line their pockets with a war in NK the way they have from the Iraq war.

All I gotta say ABB is 19 more days until I'm outta this country! "Oh happy day! Oh Happy day!" Of course, I will be returning 20 days after that, but let's focus on the positive!

I have a quote for you from Le Nozze Di Figaro (it was actually my lyric of the week this week) as it totally applies to my feelings regarding the bush adminstration:

Roughly translated: "If I survive this shipwreck, I'll no longer fear any storm at sea!"

The problem is Joe Q. Sixpaq actually cares about "American Idle"; he doesn't give a damn about the "real" news. Darfur? What the hell is that? People only started giving a shit when George Clooney and Angelina Jolie mentioned the place. North Korea? Most people can't find that country on a globe, but they can name all the past winners of "American Idle" or the current winner of "Survivor".

We're going the way of the Roman Empire: bread and circuses. Except in our case it'll be cheap gas and reality TV.

Thank you for bringing this to our attention. I have never seen American Idol or any other "reality" based program because it seems so petty. I stopped watching CNN that morning because of the stupid content and never heard the Peace with North Korea. Pathetic that a tv show takes news precedent over important international news.

Happy I'm not the only one who could care less about American Idol. Have heard people call Simon a genius, please!

Really annoy's me when watching an interview on an important topic. The newsperson is rushing them along, and cutting in with their own commentary, assuming what they might say. Then, "thats all we have time for. Coming up next the unedited full interview with Britney Spears, and Kevin (whats his name). You can't miss it.. Ugh!!

I watch Idol every time it comes on, even do a show about at least once a week. Everybody has a favorite show or you all wouldn't have TiVo. I bet yall aren't recording the news. I haven't been voting for contestants in recent weeks, but I will on the finale. But I never miss voting in local and national elections (esp the big ones). If you don't want all AI, all the time, then don't watch the local Fox news shows. My news plays into the myspace crowd every week by hyping stories that teens would like. Its kinda pathetic but they want ratings, so hey.

Might I suggest The Newshour with Jim Lehrer for those who are feeling news deprived? No commercials. No Idolatry. Just news.

Glad to know that I'm not the only person who doesn't watch 'reality tv.' I too am pissed that all this artificial reality is taking the place of real reality. But, as has been mentioned, it is the opiate of the people who apparently find real reality so off-putting that they have to have a pasteurized, sanitized for your protection version. Eeeeewww!!!

For some reason, I've gotta say to most of the comments, "We don't believe you. You need more people." Even if you don't watch AI, I'm sure there are other non-news shows that you just can't miss. For some reason, I find it hard to believe that all of these commentors who are so disgusted by our culture's degineration are really watching the news then trying to save the world. Entertainment isn't a bad thing. The same folks who vote for American Idol, are often not old enough to vote for mayor, governor, or president. And just because someone enjoys some good escapist television doesn't mean they are oblivious to the world around them. Damn, it's not an either/or proposition.

I can understand that shows like The Bachelor and AI don't need 10 minute in depth news coverage while foreign policy changes get short shifted. But, for real I doubt most of you care about it as much as your comments convey.