Another day, another pile of bullshit...

This bitch woke up at 6 o’clock this morning. After fixing my morning coffee, my ass turned on CNN to see what bullshit was unfolding.

The NSA is building a massive database of American phone calls….domestic phone calls between citizens.

The good folks at CNN were quick to point out that this differs slightly from the Domestic Spy Scandal already kindling because the newly divulged database is of phone numbers and does not include tapes of the calls. 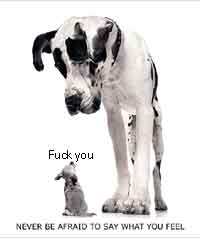 And that bullshit is supposed to slide down easy? Oh great…the NSA is just keeping track of who called whom domestically. A bitch is relieved to know that (not), because certain naughty phone calls in this bitch’s past are not for NSA voyeuristic consumption.

Anyhoo, this bitch calls bullshit on this entire scheme!

Since when does the phone company get to lie to me about who they give my personal information to?

We have a contract, assholes, and no where on it does it say that my calls may be monitored by the NSA. Shit, if it didn’t involve a 15 hour wait on hold and near stroke inciting run around complete with repeated please state the reason for your call drama a bitch would complain.

As far as this bitch is concerned the potential leakage of my phone dialing habits should have been divulged in my phone company contract. My ass is not the only person to use my phone to make calls…and this bitch would have been more selective of who was allowed to dial from my phone had a bitch been alerted to this NSA related possibility.

Also…having a phone is not a requirement of citizenship or any known law, and this bitch is offended that my ass was not given the opportunity to tell the phone company and the NSA to fuck off.

So, let me make sure my ass has this down. This bitch has to monitor the use of my home phone like a hawk, but an employee of the Department of Homeland Security can indulge in child sex solicitation unchecked from his office. If y’all NSA people are so on top of shit, why did a local police department have to call you up and tell you that the government employed a fiend?

Mayhap someone is monitoring the wrong phone lines. This is like the farmer watching the corn grow while the fox raids the henhouse. What else are y’all missing while trampling on citizen’s privacy rights?

This bitch honestly hopes there is taping involved, because the thought of the NSA collecting phone call information so that they can run a computer program to find the pattern in the chaos (very Contactesque of y’all, by the way) rather than indulging in the civil liberties violating domestic spy bullshit that we all assume they are doing frightens the shit out of me.

I am sure the NSA does not care who some random female from St Louis is calling. The report stated millions of Americans not all Americans which I would assume would mean Americans of interest. Unless you are calling numbers that would be linked to terrorist cells...dial away

It's bullshit that we are almost becoming immune to our loss of civil liberties....goddamnit, it gives me a rash no ointment can cure.

One more tidbit on this theme...

Did you know that phone calls made using cable t.v./internet are not held to the same standards as regular land lines?

Found this out recently... of course, after we signed up for the cable TV, phone and internet package from our local cable provider.

Other than bitch about it, I am really wondering what else can be done to protect our rights? Not enough representatives seem to be on board with this... and to think, they're supposed to be defenders of the constitution.

Once again another keep-it-real tirade from my sister. Thank God you're here to keep me informed because I would never know a thing.

@ air_force1: ABB would be a prime candidate, as would anyone who supports peace and peace organizations, expresses dissent from the current regime, etc. To think that they're only monitoring calls to numbers "linked to terrorist cells" is a bit naive. This government spies on (and arrests) high schoolers for criticizing it.

I discovered this blog a couple weeks ago and am completely hooked. A bitch is brilliant.

My girlfriend Karma June and I call the Feds "Mr. Whiskers" for some lost in time reason. Every few months when another story breaks about how Mr. Whiskers is watching us, we like to start off phone conversations with "Oh and by the way, Mr. Whiskers, fuck you!"

you pepel shold stop your worreyeng...how do you expect the goverment to protect you from killers and terrors and the like if thay can not monitor comunicashons....you shold all grow up and realise that freedom is not free and it is not cheep.....beside if you are doeng notheng wrong then you have notheng to worrey abot...another theng you shold suport your leaders and be thankful that president bush is lookeng out for you....even if he messes up from time to time he is a good man....no man can do rite all the time...well that is all i hav to say.

I'm really hoping that last comment was sarcasm. We don't HAVE freedom if we have the government monitoring communications. It's sort of the opposite of freedom don't you think? How much are we willing to give up for the illusion of safety? I don't for one minute believe that any of this crap makes us one bit safer than we were before. Your odds of being killed by a terrorist still remain next to nil. And you know, it doesn't matter whether ABB is "significant" enough for them to want to spy on. The whole argument that if you're doing nothing wrong you have nothing to worry about is patently ridiculous. Innocent people never get accused of anything right? Horseshit. 9/11 is being used as a tool to manipulate the American people and it's shameful how many people don't care. God help us.

Aladdinslad, you are an absolute idiot-and that's putting it mildly. Go review this link before you even attempt to talk about US politics, because you're obviously not familiar with the basis of our nation's government.

No, freedom is not free-but to say we have to pay for "freedom" by giving up the right to privacy indicates that you've been thoroughly taken in by pro-GWB newspeak. Which reminds me-here's another item that you might want to put on your reading list.

Although given your poor command of English, I'd be shocked if you read much at all.

First, no. According to USA Today's article (http://www.usatoday.com/news/washington/2006-05-10-nsa_x.htm), "The agency's goal is "to create a database of every call ever made" within the nation's borders."

But think about it for a second. Do you really believe that there are enough "terrorist cells" in this country for tens of millions of Americans to be calling them? Why hasn't the government stopped any of these millions of terrorist cells? I mean, if they know what the terrorists' home phone numbers are, why not call them up and trace it?

air_force1, et al., the naivete has got to stop, for all our sakes. Why this compulsion to believe everything the gubmint says? Do yourself a favor and start with the opposite. They say they're not engaged in domestic spying, then they say they're only spying on a few Murkans who are talking w/ terrsts, then they're caught in their umpteenth lie, and it turns out that they're actually spying on millions and millions of Americans talking to one another inside the country -- a wide, indiscriminate sweep, you and me.

Newsflash: the gubmint is lying to you. Their interests are not yours.