Insane in the membrane...

President Bush must really harbor some deep animosity towards his brother Jeb. Why else would a two term President with no coattails to speak of and a approval rating below 35% issue a statement all but 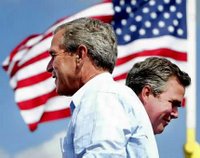 A bitch imagines that they must have had some sort of fight. Yeah, a big blow up fight over disaster funding for those fires or maybe they traded words over how the FEMA fucktitude is going to impact Florida during hurricane season.

Something must have happened and it must have been one hell of a fight for Scooter B. to fire off that kind of backstabbing cruelty.

Lawd, a Scooter B. endorsement is the verbal equivalent of arsenic in the afternoon tea!

But what if Jeb and Scooter B. didn’t have a fight? What if Scooter B. really thinks his opinion has weight and that voters want to see who he recommends for 2008?

Shit, he'd have to be crazy...insane...out of his mind and delusional!

Too funny! That's our Deicider in Chief. But you may be right about him being mad at Jebby - back in 2000 when G-Dubs lost Florida (before Katherine Harris and the Supremes handed it to him) Jebby was a virtual outcast as the returns came in. G-Dubs expected to carry Florida easily, and when he didn't he was a bit pouty about it. Of course Lady MacBeth Babs was really pissed. She wouldn't even talk to Jebby. Oh well, G-Dubs has always been her favorite. Maybe she scripted that little sound bite for G-Dubs herself just to screw with Jebby.

This is all just speculation of course ;)

I imagine Bushie is kept so sheltered from things like opinion polls, news, and reality that he has no idea that most people are against him right now. When ever he encounters somebody who actually disagrees with him (which is rare given that most of his audiences are hand-picked) he seems genuinely surprised.

You have to remember that these Republicans just aren't smart. Just because they recognize the name, they might vote for him.

jesus christ. i could not withstand another Bush Presiidency. I feel that asswipe is gonna owe me 8 years of my life back as it is..Austrailia here i come.

I literally started laughing aloud when I read this. ABB, thanks for making something so terrifying into something to laugh at. Damned hard to keep a sense of humor with that flippin' bozo running the country.

Katherine is mine! No, she's mine!

My parents live in Florida so I get to see Jeb Bush in action first hand. Start praying now that Jeb NEVER becomes president. He is more intelligent than George but is a mean bastard. George, evil as his administration is, has some ability to come off as affable. Jeb does not even know how to pretend to be affable. If he runs for president, his nastiness will come through no matter what. Maybe George will start endorsing his brother Marvin if Jeb doesn't work out.

You know, here in NYC a few years back, Al Sharpton used to joke that he'd endorse Guiliani just to fuck him up.

W deserves a big fat Homer Simpson "Doh!" every time he opens his mouth! Hopefully his endorsement will actually turn voters against Jeb, but I doubt it. This next one will be as polarized on a few key issues as the last one. The only problem is, former liberal block voters in key states are leaning towards conservative ideolgies, especially with current issues like immigation reform. If the Bushes win, (or take), the election next time, I'm going to Canada, Rev. Australia is too far! Peace Ms. ABB Love your blog

All this and Wu Tang, too.

Those tempted to flee the rising tide of neoconservatism are going to have to work harder than Oz and Canada, both of which are displaying troubling trends with regard to right-wing politics.

The Bad News is that sanctuaries for free thinkers are disappearing beneath the knobby boot of global technocratic surveillance. But on a positive note, Belgium and vast segments of the Third World still hold some promise.

I left Florida, my home state where every family member is, and vowed to never consider returning until Jeb is long gone. He ruins everything he touches (sound familiar?). My parents, life-long Republicans, changed parties because of Jeb and his brother.

What sucked even worse was trying to explain to my students of color why his daughter got out of prescription drug fraud (more than once) while they were nailed for every tiny crime or how he justified ending/narrowing affirmative action without it going to vote.

Thank you for putting this on your blog!

And as usual, ABB, your post made me laugh out loud.