Breaking news about the sorta-news! 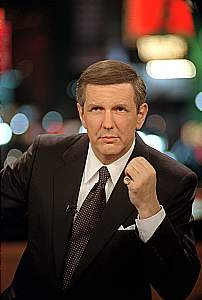 Elizabeth Vargas is set to go on maternity leave and will return to her 20/20 post afterwards.

Bob Woodruff is still recovering from the injuries he sustained while on assignment in Iraq.

Way to counter-program against that perky and orangishly pinkified soon to be CBS anchor.

Oh and Brian Williams must be dancing in his Mary Janes now that ABC and CBS have decided to face off before school.

And a certain Jim Lehrer of PBS comes off smooth as custard…the dapper gentleman of the early evening news crowd. Go on with your bad self, Lehrer! Stay above this shit and keep kickin' it old school! 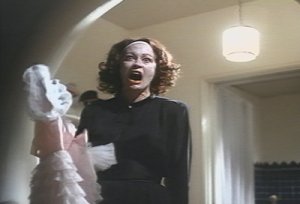 Lawd, a bitch is having a mental party imagining Katie Couric's reaction to this shit! The visual is strong and Mommie Dearest specific (wink).

Let's not forget poor Wolfie B. of CNN...still trapped in that crazy Situation Room from hell.

The best reality television is obviously the news division programming meetings. They need to set cameras up, hire three judges with attitude problems and have at it!
at May 23, 2006

ABB! I received an e-mail from a certain organization about the "censure Bush" campaign telling me they were starting to run their ads on CNN, etc yesterday...did you see them?

I caught one on CNN early evening that was all like "Bush uses the NSA to spy on his own people. . .Tell Bush to fight terrorists not his own people" etc!

Happy day! Soon he will be impeached! Hooray!

I have always that charlie Gibson was excellent when subbing on World News Tonight. What bothers me though, is how Elizabeth Vargas has been discarded so quickly. I know that it is all about Nielson numbers. I have always loved Vargas, and was glad to see her get the anchor chair, but as soon as I found out she was pregnanant, I knew it was going to be the kiss of death for her in that role. So, now she has been "demoted" back to 20/20. I think that the people who watch the "big 3" network evening news (which I believe is a different demographic than those who watch the cable news programs)are more comfortable with the "father figure" anchor. This is another reason that I think KAtie Couric will be unsuccessful, besides the fact that she is a terrible journalist. I hope Elizabeth lands on her feet with even better things coming her way.

First, sorry I haven't commented lately. I do visit, but it's via Bloglines. And bloglines doesn't show as a "visit" to your blog unless I actually click into it. So I have been reading.

ABB, you made my day. I now have a permanent mental image of Katie Couric screaming with a wire hanger in her hand. As disturbing as that scene is, it seems to fit Katie quite well.

I'm bummed. I've had a grudge against Charlie since I heard him say something shitty about NYC. I watched Elizabeth after Peter died, but I miss Peter terribly. Also, after the 20/20 Special Matthew Shepherd revision episode, hosted by Elizabeth, I kept thinking about what an angry queer guy called her--"anamatronic homophobe Elizabeth Vargas", so as I watched her on the news almost every night, I said, "Hello, anamatronic homophobe!" But I liked the way she delivered the news. I just don't know what to do now.
yrs, a dharmadyke