My people call that bullshit...

Happy Cinco de Mayo, chil’ren! Although a bitch is partial to el grito de independencia, 16 de Septiembre, my ass shall celebrate this victory over the French May 5, 1862 with full and extreme bitchitude! 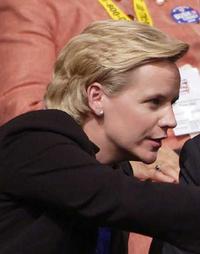 This bitch tuned in for the Mary Cheney interview with Diane Sawyer on Primetime last night. Mary has a book to pimp and Diane has a show to pimp, so this was a marketing marriage made in...well, marketing heaven.

Mary spoke about coming out to her parents…her love for her partner…her support of her father during campaigns…and her general thoughts on marriage equality and so forth.

Dickie C.’s response to Mary coming out was apparently something along the lines of…

“You’re my daughter…and I love you…and I want you to be happy.”

Now, there’s a statement of support!

It just doesn’t jive with Dickie C.’s pattern of supporting President Bush as he promotes a Constitutional Amendment that would ban gay marriage.

What was left unsaid for some bizarre reason because Diane didn’t go there in the interview was the fact that Mary and her partner are being denied a multitude of basic rights that are guaranteed through marriage. Mary’s statement that in her mind she and her partner are married and society just hasn’t caught up just don't hunt. Society and policy not having caught up equals a denial of protections and rights that would certainly bite her in her privileged ass if she wasn’t able to purchase those protections through the lengthy legal process most gay and lesbian couples struggle to afford.

And it is worth mentioning that the lengthy legal process and costly purchasing of legal protections for same-sex couples still doesn’t afford the parties involved the same legal protections Brittany Spears got automatically when she waltzed down the aisle with her first husband in Vegas like a motherfucking fool.

Anyhoo, Mary went on to state her support of adoption rights and blah, blah, blah. Basically the interview was rather uneventful given what could have gone down. But Mary did say something that perked this bitch up.

Diane questioned her about her continued support of the Republican Party and why she has not confronted Bush about that pesky Constitutional Amendment. Mary tossed back that she refused to attend the State of the Union speech where Bush talked about the Amendment and then she said this in response to her lack of direct confrontation with Bush…

“Can you be too respectful of the leader of the free world?” 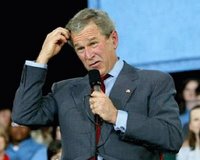 Now, this bitch has been chewing on that bone for years. Yes, Mary, you can be too respectful of the President. Last time this bitch checked, he was elected President of the United States of America and serves by the will of the people. For the record, Americans do not elect the leader of the free world.

The founders of this nation actually debated the issues of respect, title and accountability. Americans need to reference history and Mary needs to reference the Constitution of the United States. Our elected officials…all of them…serve by our will and are our employees who are supposed to handle the people’s bitness.

Some asshole failing to do a job properly does not result in a new job description.

Mary Cheney is not alone in this. America is populated by apathetic citizens and kitchen table critics who are intimidated by titles…the image of power, which the powerful cultivate for that vrey purpose…and who are confused as to what the fuck government is supposed to do and who government answers to.

That may explain why a woman with direct access to the President of the United States would choose to kneel in submission to a title that does not exist rather than demand some rights that do. 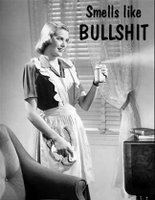 Or, she could just be full of shit.

As for Mary’s request that we take a close look at what Dickie C. says about freedom for all people?

A bitch is too busy observing the contradictory nature of those pesky freedom denying actions he seems so fond of.

state of our nation said...

I saw the interview also, and i got a tad bit ill from it. GROSS. I hated how she could just sit there and say shes proud of her dad, yet his actions yell the fact that he isn't all that pleased with who she is. He reminds me of Strom Thurman, proud segregationist, father of a lovely niggra child. Gross.

If you are going to be a bigot, don't be a circumstantial bigot.

I always found it come bullshit that DC's daughter is a lesbian and his boss talks smack about gays destroying the world. I don't understand how any gay person could call themselves a republican.

But then again with Mary, We FTMs always figure there was a problem there [that is a JOKE OK? Not the FTM part... Don't go beating on me.. I might like it.] Mary should try being transgender for a week.. and a gay FTM top with no.. but then she would still rationalize and deny. It is sooo nice to be the official poster child for denial.

If you pay me enough I can pretend to be a straight woman too. What you see is not what you get sometimes.

Probably more than Dick Cheney, I wish Mary wasn't really a lesbian. She makes all queer folk look bad. I can’t help but think her partner doesn’t have any self-respect to allow Mary to disrespect their relationship like that.

ABB, if your people call that bullshit, it is little wonder I like your people.

I feel bad for Mary Cheney...she's in a stuck position because gays want her to publicly stand up against her father, but then again, we don't know the real relationship between Mary and Dick...I believe that politicians do say the things the really mean...they are just trying to please their constituents, which is why people say that politicians are the best liars...us gay people should just expect Mary and Dick to have a great father/daughter relationship and stop pressuring her to go against her father in the public...what would you do?

now look what you people have done: put me in a position to defend the cheneys! GAH!

ok, here's what i have to say: she has a right to love her father without loving everything he says. also, pre-04 re-[s]election, cheney was asked about gay marriage and he dutifully skirted the issue and said he wasn't down with the bans, but policy is "the president's job." sure, it was bs, and it's clear he wields and awful lot more power than he lets on, but he's a politician with a gay daughter. i can appreciate that he loves his daughter even though he's a republican... in fact, it almost makes him seem human.

on the other hand, when he and lynn bitched about kerry's "insensitivity" for even bringing mary up in the context of gay rights... well yeah, that was total bullshit. he returned to the slimeball in my eyes that he had been before.

but why is mary demonized for loving her father? i didn't watch the interview, but i think family is great thanks to the unconditional love it provides. much as i hate dc, i can't expect his daughter to do the same--she loves him, and i say good for both of them.

Mary is not demonized for loving her father by this bitch...but my ass does call bullshit on her assertion that having your parent state to the world that he 'stands with the President' on a Constitutional Amendment to keep you and your partner of 14 years from rights despite your equal tax status in this country...yeah, that shit...well, it just doesn't fly that all is well in the house of Cheney.

A bitch is reminded of Maya Keyes...Republican candidate Alan Keyes daughter...and how she responded to her father's public denouncing of lesbians in general and Mary Cheney in particular.

If memory serves...Maya, who is in her 20's, was outed during Keyes campaign against Obama and then took a public stand against the RNC and her father's push for anti-gay policy.

A bitch disagrees with Maya on a lot of political shit, but that woman showed courage...she showed the world that she will be respected for who she is not in spite of who she is.

What a fantabulous lesson for us all...

It should be added that Mary is also demonized for working in a paid position to re-elect the Bush administration, knowing that doing so will further the radical right-wing effort to ratify her second-class citizenship. Love your father, Mary, but don't take a large salary to work against yourself and the rest of us because we will call you out for your bullshit.

"Can you be too respectful of the leader of the free world?"

Oh, hell, yes. First it's voluntary, then it's mandatory. And it's called tyranny. This can happen with any leader, it's just extra embarassing that it's gw bush and it's the 21st century.

right on the head when you said Mary can purchase her rights.

i've heard her described as a traitor, but that' just not true. she knows where her interests lie. she can be that damn rich enough get out of the worst social implications of being a lesbian. but i've never seen someone break down class barriers by being that damn queer.