A bitch has been annoyed as hell over the use of language lately. When I hear certain words I just want to projectile vomit straight into the speaker’s mouth.

Saying change doesn’t equal making change and, even if it did, that wouldn’t guarantee that the change you intend to do will be positive. Every time I hear a politician say change I sit there waiting for someone in the audience to shout “Hey asshole, are you allergic to specifics or is your complete lack of them due to a moral objection to keeping it real?”

Shit, Scooter B. brought about change and this bitch will require years of therapy to recover from that shit.

Now, the economic shit storm has resulted in the resurrection of the word stimulus. A bitch is pretty sure stimulus is listed on the Top Ten Words That Make Talking Heads Sound Like They May Have a Clue list.

None of the talking heads seem to agree on how to stimulate the economy so instead they sit around debating whether the economy needs stimulation or not and putting a bitch to sleep.

This bitch is pretty sure that there isn’t a more misunderstood group in America than the middle class. The middle class has been cast as the foundation, the salvation, the assholes that need to spend more money, the bedrock, the soul of the nation and the best client a capitalist drug pusher ever had all at the same time. The one thing I know the middle class isn’t is heavy in the pockets. Everyone I think is middle 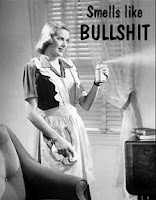 class is up to their eyelids in debt just like my working class peers.

Combine an election year, economic drama and a complete misunderstanding of the middle class….mix it all together…and you’ll end up with some politician saying something along the lines of “I will be an agent of change who will create an economic stimulus package that will revitalize the middle class.”

Note - traditional bullshit should be served steaming hot over a thick slab of ice.

I am with you. If any company was ran like the government it would have been out of business years ago. Why have a budget if you can just always increase it whenever? Why bail out corporations when it is supposed to be free trade market? Why give subsidies? Why fight useless wars that cost billions. Why give $800- 1600 to folks when you don't have any money? Why is government so committed to messing up? None of the stuff these people do makes any sense. It is as if they really can't figure out the job and are just winging it. It is time for some real business sense.

"Economic stimulus" = funneling more $billions$ up to the mega-rich.

Nothing more, nothing less.

BUT WOW! three hunnert dollars! All my problems are solved!

If I get a check, I'm going to do what the government refuses to do. I'm going to be responsible with the money and pay down some debt, instead of spending it on some more useless garbage.

I'm urging my friends and family to do the same. Use this money to pay down the heating bill, catch up the car loan, or pay off a high-interest credit card. Save the money, if possible. Whatever you do, don't waste it.

Ding, Ding! We have a winner .. tell us what this contestant has won bob!

A lifetime of debt

Hey sorry for fucking up the economy, sending every one and there mom to war, the housing market and job market...here's $600, drinks are on me.

Years of therapy for the entire nation as well as years of unrelenting hard work for the Constitution to recover from Scooter B's change.

The great thing about appealing to the "middle class" is that almost everybody in the U.S. imagines that they a part of it regardless of their actual income.

Sweet Jesus you hit the nail on the head Shark Fu. Why does their bullshit and bravado work on the masses? Surely they aren't that stupid..or is it that they want to believe?

Actually another way to look at it, which seems more plausible to me is:

No one but the koolaid drinkers buys it anymore..but the press keep shoving his shit down our throats. Complicit bastids.

I'll just leave you with the tail end of a comment I left with the Heretik.

"Pull my other leg and cover your nose."

This was in reference to the "super-delegate" phenomenon. Obama won SC handily, but be sure to check the delegate count later.

Before you ask, I promised my daughter I would try to stop cursing, but I find I cannot discuss politics without expletives.

If you needed proof you're right, listen to the FIOS (Fork It Over, Suckers, you know, the IRS) talking about how they will need until at LEAST late May to get the frakking checks rolling, maybe late June, and they'll need two and a half more gorplesnokking months to print all the checks. So, the stimulus/surge/shullbit should hit the streets in useless, lumbago dribs and drabs from early July through late September, but absolutely no yarkyarkyark help right frangipani NOW.

Also, anyone who takes their "stimulus" and buys anything at Walmart (i.e., Chinese imports) will just be flushing MORE slumgullion government money down the exfoliant porcelaine poopchute, because it sure won't help the elkabong US economy. But no allowance for that has been made.

on the subject of words..the word "tolorance" bothers me. It implys a boiling point will be reached. Its true definition is negative, as i tolorate her smoking. A better word imHO, and a better concept to strive for on a social lingo level, would be ACCEPTANCE of course that impys work, consciousness raising and yes tolorance is a gateway, but not a goal. Just my .02 cents on traditional words ...and words do matter. and stimulus good lawd, to use a bitch's parlence, could mean just about every thing that stimulates on any level..what the NEO libs/cons have in mind is Friedman economics..and it has NOT worked in the past, (isn't one definition of insanity, doing the same thing over and over again and expecting different results)