A bitch woke up with a sinus headache that’s still lingering.

Anyhoo, this bitch caught the morning sorta-news and was fascinated by something Tim Russert said while analyzing Senator Clinton’s prospects in New Hampshire given Senator Obama’s poll ranking there and his win in Iowa.

“What she has to do is find a way to substantively say to people this is where I differ from Barack Obama on these critical issues”.

Now, a bitch is on record with the fact that Senator Clinton’s campaign tactics during the Iowa push pissed me the hell off…but something about Russert’s statement hit that nerve all over again.

It pisses me off that Clinton minions were all over the media in mid December mouthing off about Senator Obama’s middle name, spreading known lies about his religious upbringing and trying to stretch teen drug use into a vast criminal enterprise (mercy!) when they should have been discussing where Senator Clinton stands on the issues and how/if that’s different from Senator Obama’s stance on those issues. 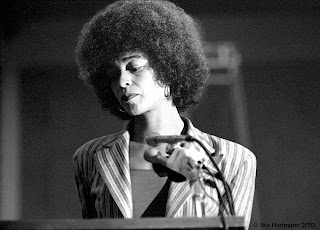 This is the ever fucking problem with smear tactics and race baiting ...the time wasted, the missed opportunities and the votes and support lost to that shit.

Now, instead of reinforcing policy differences that were spun during Iowa, Clinton 2008 is trying to bring them up. The potential free advertising to New Hampshire that the national coverage of Iowa represented was lost in the shit storm of a New Hampshire campaign manager being forced to resign over ig’nant comments…a staffer being forced to resign after she sent out an e-mail stuffed to bursting with ig’nant comments…and then Bob Kerrey being forced to apologize for, you guessed it, making ig'nant 'why GOTV when you can stir up the bigots' comments.

Now, as I watch Clinton 2008 point out differences in the eleventh hour of the New Hampshire Primary campaign, this bitch can’t help but wish they had done that shit a month ago…spared me this bitter disgust and ripe resentment…and made this a campaign about the issues from jump rather than an extended exposure to the acrid smell of politics as usual followed by a desperate spritz of 'by the way, here’s what I stand for' at the end.

That shit may work tomorrow.

Or this may be a case of shoulda, coulda, woulda.

Did I mention that anything is possible?
at January 07, 2008

Check out pajamasmedia.com for a scathing article by Ron Rosenbaum on dis-endorsing Clinton.

"It pisses me off that Clinton minions were all over the media in mid December mouthing off about Senator Obama’s middle name, spreading known lies about his religious upbringing and trying to stretch teen drug use into a vast criminal enterprise..."

THIS is the absolute truth right here!

I really wanted to go and kick Bob Kerrey right in the nuts when he did that. The sorry bastard.

I too am very, very disappointed in Hillary and her campaign machine. With such a strong field of candidates, an embarrassment of riches, really, I was looking forward to an oh-so-difficult but satisfying choice based on ISSUES. But you know, as much as issues are important, I just cannot let that kind of behavior slide. Either she was completely aware of what the staffers were doing, or, she didn't know about it specifically but she condones it, and only fired those particular staffers for the sake of appearances. She needed to harshly denounce such actions by her own staffers - anyone's staffers, really - in the strongest possible terms. She didn't. And that's not the kind of leadership I want for my country.

I'm not sure Hillary would know how to run a different type of campaign. It may show the "generational difference" between her tactics and those of Obama - and, maybe, even Edwards. I have been disappointed in her campaign, too, because I think it's time for a woman to be president - but not just ANY woman.

Why can't it be just any woman? It's been just any man since the begining of the nation. We've had slave holders, bigots, H-bomb droppers, stupid men. I am frustrated beyond belief!

Now look KAO, don't come in here adding more fuel to the fire with a stupid comment like that 'less you're looking to get your ass kicked all over this blog by its owner.

I had to explain to my aunt and uncle tonight that no, Barack Obama was not in fact Muslim. and we'll only hear more of that when it's general election time.

Why does Madam Clinton think it's a good idea to start now?

Discredit the opposition is not a new game to them. We need to remember the Bimbo attacks that the Clintons launched on any woman who spoke up about his Lothario ways. The strategy there was to so discredit the woman by painting her as such a slut that there was no need to defend Bill's behavior.
So, now they are doing the same thing. And, in a way this is a discussion of issues. I consider it an issue that instead of addressing what needs to be addressed, they attack. I'm glad that they let us know before the election that they are still opperating from the same play book. Not who I want as president.

I didn't even know Hussein was Barack's middle name until recently. Not that I need to know or certainly not that it's important in the race.

But I did wonder why all the wingnuts were referring to him as Hussein in their endless stupid adolescent tirades.

Now that I know, my blood boils out of my skin whenever I see anyone refer to him as Hussein as if that matters one iota.

Fuck the Clinton machine.
FEEL THE LOVE!
Everybody is voting for Barack Obama. A black man named Barack Obama is poised to be the next president of the United States.
Barack Obama is being compared to Jack Kennedy!
The most inspiring statesman like political campaign speeches we've heard in decades are coming froom a man named Barack Obama who if he does everything right will be the next president of the United States and the first Black man to hold the office.
BAW, I'm having a hard time getting angry and negative the past week or so in this election cycle.
FEEL THE LOVE!!!