A bitch is feeling illish just in time for the weekend. 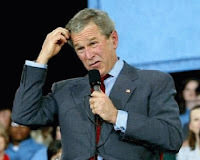 Suffice it to say, I’m in a mood and listening to Scooter B. (President Bush for the uninitiated) speak didn’t do a damn thing to improve it. I mean, how the fuck am I supposed to feel better when that idiot is announcing his stimulus proposal with all the authority of a 5th grader trying to explain cold nuclear fusion.

If you ever needed proof that our government is in service to somebody other than the masses you’ve got it in this so-called economic stimulus plan.

The Growth Package (get your mind out of the gutter) is big on ideas and small on specifics but leaks hint at tax rebates for low to moderate income families and some businesses. The hope appears to be that rebates of between $300 and $800 will make the American consumer feel more secure and encourage spending.

Okay, so the Federal Government is encouraging low to moderate income Americans to ignore their debt, the lack of job growth, the increase in the cost of gas and food, the stagnant economic growth not to mention common fucking sense and take a whopping $800 to the mall. Oh, and they want us to do that shit swiftly so as not to delay stimulation (mind out of gutter!!).

After years of pro-corporation anti-citizen let the rich get rich and the poor get poorer economic abuse dressed up as policy, these crazy motherfuckers fixed their face to tell the American people that we need to get our spending on or we’ll be sorry. “Let them eat cake” has become “Let them buy another iPod.”

How about an economic policy that encourages the production of something other than consumers? I don’t know, maybe something we could market to the world other than war and vacationing rich people that would bring some fucking cash in?

Low and moderate income Americans need to pay down our debt…because the economy is fubar and we’re the first to get fucked over, fired or downsized.

Let the people making six figures plus a year get the economy stimulated to the point of fulfillment (ooooh, you've got a naughty mind!) and increase their fucking debt since they’re the ones who’ve been feeling the bulk of the tax love from Bush and his minions.

They'll only understand a wallet based correction anyway.

The rest of us should follow sound economic policy and put that pitiful rebate towards debt …
at January 18, 2008

"How about an economic policy that encourages the production of something other than consumers? "

YOU GO, SHARK-FU!!! This is about the most important point we can make.

"Let the people making six figures plus a year get the economy stimulated to the point of fulfillment (ooooh, you've got a naughty mind!) and increase their fucking debt since they’re the ones who’ve been feeling the bulk of the tax love from Bush and his minions."

AGAIN! GO! This guy makes me sick. Paying down the debt is the only way to survive. For some reason, predatory lenders are the only people talking money to poor people. Why is that????

Sadly, this relatively rich bitch is going to use any extra money she gets to pay down *her* debt. I already have an iPod, but what I really need is a fucking down payment, and the only way to get that is to stop making credit card payments and start saving.

hey.. love the name of your blog!

How about if the shrub and crony's roll back the tax cuts of the super rich and redistribute those to people of modest means. We'd spend it in a heartbeat! On things like fixing our cars, clothes for the kids, maybe a little health care. You know, really stimulating investment!

Any money they send me will go to pay down my bills. Absolutely. I don't need more stuff; I need security.

The scary thing is that with these tax cuts I think we will be putting money into the hands of people that are LESS LIKELY to spend it (ESPECIALLY) with the recession. I mean, we could be setting ourselves up for a depression.

I agree, it's time to become producers not consumers. It's time to stop selling our pastures of plenty for a quick buck.

i agree on all points made. it's hard out there for an american mid-level fam!!!! mobilize!!!

What the hell...the avergae fool will buy into it. Go out and buy an extra Wii and Madden Football. We deserve the leaders we get.

When everyone from the unemployed poor to the middle class is in dire straights financially and then they are given a fat check and told to go spend freely NOW!, it's hard to convince them that they should pay down debt or sit on that cash. Also, when they are taunted with the idea of getting a fat check to spend freely, it is hard to convince them that they should lobby against it and demand that the 6 figure folks should stimulate the economy.
It's all part of the plan to shackle the poor nd middle class while funneling more and more of our nations resources (cash) up into the coffers of the mega rich because in the end, that's who is going to end up with the bulk of that cash.

Even the upper middle class are not spending the little tax break. I don't know why, but I got a check for $600 in the last tax break and I saved it and paid off bills. I did not view this as an opportunity to splurge. In fact after 9/11 it felt irresponsible to splurge with the check. This administration thinks people need a couple of hundred dollars, try a couple of thousand dollars to make a difference.

Overall, I think what is going on is a direct result of society's consumption mentality. Personally, I don't believe in disposable income unless one is a billionaire (a million dollars does not go far today either after taxes). There is so much today that we do not need to survive on this planet and what we do need is an after thought. Do I need an ipod or even a cell phone (we did survive without them not too long ago)? Should I buy my kid a lot of toxic, cheap toys or OMG, not spoil my child and force them to imagine? I am gen-x and grew up in a middle class home and we did not spend money as a lifestyle or entertainment, we had to save for things that were out of reach and made choices that were not our dreams, such as working and saving for college and going to city college instead of private, buying used cars instead of new ones. We were not financially challenged, but I lived in a community where you did not spend just to spend. This may not be the behavior of lower or middle economic people, but if this is the behavior of upper-middle to upper class is it affecting other people? Since many things are not being manufactured in America, the money is going outside to fuel economic growth in other countries.

We have bought into this idea that these excesses make us safe and the President is marketing the message that if you spend it will save our economy. He did this after 9/11 and yet here we are almost 7 years later and he is still telling us to spend to save this country. Somebody in Washington needs to go back to college and study economics and sociology.

Ahhh, another push in the bush. (Get your head out the gutter) Penetration is deep, oops :0) for this administration and they won't be happy until they cause mail menstruation. That is bleeding of finances of all proletariat interests. Yes we've been reduced to a blood clot by indifferent monetary investments. Crude is what it is and it appears to be oil. "Damn happy days are here again." (Psych) We gets nada, zilch, not a f**king dime. Read it and weep, but while y'all are weeping, I'm gone be creeping. :0)

"How about an economic policy that encourages the production of something other than consumers?"

I think people are too tranced with money-spending to help themselves. They love their gadgets and gizmos. Had a lady try to sell me some bullshit cable package the other day. You should've seen her face when I told her I hadn't owned a TV in 12 years. "Ag...oog...duh" was all she could say.

I keep wondering why we need to "grow the economy." Personally, I've been trying very hard to reduce the quantity of "things" in my house. How 'bout we reduce what we use, spend a little less, save a little more, and try to have less impact on the environment? Oh, because Halliburton and Cheney might have to reduce their oil-based paychecks.

"Personally, I've been trying very hard to reduce the quantity of 'things' in my house."

I have a friend who lives sparse. He moves a lot, sleeps on a mattress (no box springs), no TV, one small bookcase, minimal clothing, one small set of dishware, and so forth.

Wouldn't it be nice to have less bills, more money, and not as much useless junk scattered around? One of my goals for 2008 is to get rid of some of this clutter. Give it away, throw it away, EBay it away, whatever.