A bitch heard that a certain Homeland Security Secretary Michael Chertoff spilled his guts to the Chicago Tribune yesterday. 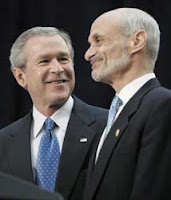 You will find the transcript of Nostradamus Chertoff’s gut-based predictions here.

“A billion dollar budget and this motherfucker is still working off of gut feelings? Jesus!”

The sorta beagles’ joint response was to continue snoring loudly, belly up on the couch.

A bitch’s next reaction when the same gut-tastic revelation was shared yet again by a rather alarmed Tony Harris on CNN (hey Harris, calm the fuck down for the love of all that’s not morning radio!)… 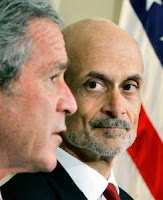 “Isn’t this the same motherfucker who claimed that the government couldn’t predict the Katrina disaster even though folks had predicted a Katrina-esque disaster? Isn’t this that same asshole? Lawd, have mercy. If his gut is correct the nation will have to suffer from the inadequacies of his mind sooner rather than later!”

The sorta beagles continued to snore while this bitch made a mental note to check our 'your government will not be there for you should a disaster strike' provisions and sweep out the 'Michael Chertoff is a cover thy ass and deny, deny followed by deny shameless cronified asshole' flee to bunker.

This strikes me, and I'm sure many others, as a ploy to distract us from the war and the US Attorney scandal and the fact that Bush is ordering Meirs and Taylor not to testify before Congress and yet another religious right congressperson has been outed as a patron of the ladies of the night and . . .

I am tired-- I repeat, so damned tired of these administration jackals trying to act like Cassandra.

It has gone on for so long I start to fear that out of pure desperation at the destruction of their party and through their deranged need to get us to support the war-- they will use their evil power to truly make something horrific happen--or allow an event that they could have prevented, (like not capturing Al Queda heads when they could have.) to instill more fear and get us to support W and this nutty assed war.

And to relive the Bush glory days of post 911.
Hell no!

Yes, yes these fools have made me paranoid. . .

I mean--would anyone put anything past Dick Cheney? The man shot his bud in the face and wanted to cover it up.

Shut the fuck up Chertoff and go waste some Homeland Security money on abusing our civil liberties once again.

Once again the level of imcompetence in government the nation is willing to tolerate is breathtaking." Who knew the terrorists would fly planes into buildings?" Condi Rice(post 9/11).Who knew the entire electrical grid for the entire NE USA could be disabled so easily? Who knew we would need an occupation plan after initial military victory in Iraq? Who knew? Certainly not our government!

Heh. That rocks. I really have nothing else to add, but ... there it is.

i guess i am wondering what exactly god is saying to this crew these days. you think since he has george's ear- that he would have set him straight on a few things. i have a feeling that he is less than pleased with the whole iraq debacle, the katrina i-don't-even-have-a-name-for-it mess, and this stinking pile of steaming corruption that seems to permeate from every pore of the executive branch. i know i am beyond disgusted.