A bitch should disclose that my ass is not fond of nuclear power plants. Oh, catch thy knee for it jerketh too quickly! I understand that nuclear power has a lot of cool as hell benefits and that it would reduce our dependence on foreign energy and so forth. My problem is not with the benefits but rather with the “oh shit, now what do we do?” negatives people like Scooter B. brush aside.

The recent earth quake in Japan (a bitch hope my readers…well, ummm…reader in Japan is okay!) and the leakage of nuclearized somethingorother into the ocean and atmosphere…and that curious delay in announcing that shit had leaked and been released into the waters of the world…made a bitch recall Bush’s nuclear push and my concerns with it. 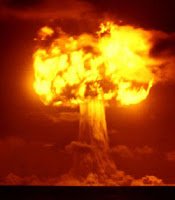 Jesus to Gawd, my nerves don’t need this shit!

A bitch was instantly back in 1986 and having a Chernobylesque nightmare about the end of days!

Chernobyl is one of the first disasters I vividly recall watching in real time. I remember the lack of information…the attempt by government to downplay to danger… and the feeling of helplessness.

Ooooh, it was awful…that helpless feeling washing over me in waves of drama whilst we waited for the end to come and hoped that end wouldn’t involve writhing in radioactive inspired pain as we slowly melted face first into a puddle of forgotten waste.

Mmmhmm, that feeling is one of the reasons a bitch isn’t fond of nuclear power.

Then there is the fact that Scooter B. digs it.

C’mon, are we going to take energy conservation advice from a man who thinks humans had dinosaurs as pets and that greenhouse gases are the result of eating too many beans?

It only takes one “oh shit now what do we do?” negative situation to fuck shit up…big time. And those fuck ups don’t clean up easy! Just look at Chernobyl, which now rests in Ukraine and is in need of some serious “when they say it may melt through to the Earth’s core what do they mean exactly?” maintenance. This bitch hopes they can start tackling that maintenance instead of dealing with political poisonings and such.
Shudder.

Anyhoo, this bitch hopes everything is cool in Japan and my ass is sending positive non-nuclear energy (wink) ‘cross the now glowified waters of the world.
at July 17, 2007

I remember reading a while back about this scientist who was for nuclear energy as a clean, environmentally friendly energy source. He felt that the good of nuclear energy should not be outweighed by its potential evil. I wish I remembered his name, or where I read that article, but I do remember thinking that until you can eradicate human evil, not to mention catastrophes like spills, leaks, and meltdowns, then that evil has to absolutely be taken into consideration. We can't assume that people will not abuse a potential dangerous power, even if it has benevolent uses. Just take a quick look through the newspaper, and see what social science and history lessons it has to offer in weighing the good and the bad of something so powerful as nuclear energy.

Besides, we are we so lazy as to finding another clean, efficient, and environmentally friendly source of energy that doesn't have the potential to do the harm that nuclear energy does?

Hi ABB: absolutely love what you do and although me and mine here in Tokyo are doing fine, it's very sad when an earthquake hits. Scary too - we felt it here, although much less.

Sometimes I'll be up working at the computer, mind totally focused on whatever it is (sometimes it's ABB, but I digress:-) and things begin to...tremble, then shake, sometimes with a weird shimmy that makes it feel like the earth is getting ready to boogie...

would be almost fun if it wasn't so...unnatural;-)

Fuck Nuclear energy..Chernobyl was a little over 21 years ago, the carnage continues. I posted on the 20th anniversary and had recent pictures up. It was horrific and I cried for the victims that will suffer for decades..eons..you get my drift ABB.

Unless and until those mutha fuckas figure out how to dispose of the radioactive bullshit safely, they can bark up another tree. This Bitch ain't buying what they are selling either.

Fuck Nuclear energy..Chernobyl was a little over 21 years ago, the carnage continues. I posted on the 20th anniversary and had recent pictures up. It was horrific and I cried for the victims that will suffer for decades..eons..you get my drift ABB.

Unless and until those mutha fuckas figure out how to dispose of the radioactive bullshit safely, they can bark up another tree. This Bitch ain't buying what they are selling either.