This bitch may have to break out the Watergate documentary tonight and indulge in a comparison between the corrupt assed shit the Nixon administration did and the current skin abscess fit to burst that is Bush’s closet full of political scandals.

Long time readers know that a bitch is a history addict with a special adoration for Watergate. I was born during that scandal…grew up on a diet of “this is why you can’t trust The Man”…and have always been fascinated by the fucktitude that was the Nixon administration.

Each time a new Bush administration scandal breaks I can’t help but think of Nixon. Yes, other President’s have been fuck ups. Hell, even beloved President’s have lost their minds at one time or another. But it takes a uniquely fucked administration to match Nixon on paranoid speculation, secret governments within our government, secret spy departments within departments, out right lying, more lying, spying on citizens without authority and using the weapons of government against political enemies. 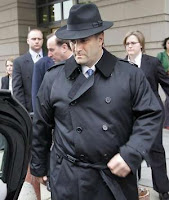 The latest turd to be added to the pile is a minion revolt coupled with a word this bitch associates with the fall of all things Nixonian.

As in ‘John Dean was given immunity and then proceeded to vomit all of Nixon’s business into the public record…specifically his business of taping himself’.

Fast-forward and we arrive at a certain Susan Ralston who would be more than happy to tell Congress about Abramoff and Rove and so forth and so on…as long as she gets immunity.

Ralston may have the goods, having been Abramoff’s assistant before she went to work for Rove.

And the fact that the West Wing has been talking shit about how they weren’t close to Abramoff…were never close to him…don’t even know each other’s middle names and are not nor have ever been BFFEs...only makes me suspicious.

Mmhmmm, that shit never passed the smell test for me...nor has it proven to be true.

But as eager as I am to see someone testify about something that they can recall under oath…ugh…a bitch does understand why Rep. Henry Waxman (D-California) is being cautious.

I just hope we don’t wind up with a building full of flies before someone agrees to play Dean and state on the record that they recall a lot of shit being ‘round the house.
at May 23, 2007

Have you read John Dean's ""Worse than Watergate" yet?

Waxman's hungry for stink. My fiddy cents says he gets to it in good time.

there is no hope.

I should start a pool on how many of his staffers that Mr. Bush preemptively pardons on January 19, 2009.

Can't wait to see bushies 'enemy list'!! Everyone who didn't vote for him and half of those who did?
:0)

I'm expecting lots of sh*t to hit the fan, but will we be too mesmerized by American Idol to recognize? Its lie after lie after lie. No wonder people don't recall anything.

Speaking of History, though on another subject, I'd really like an Angry Black Bitch to comment on this: http://www.slate.com/id/2164062

Please. And just to follow through, how do you feel about this?
http://tinyurl.com/yo3a8k