This bitch caught the end of a news bit this morning and had to dig a wee bit deeper.

It seems that Republican lawmakers aren’t so opposed to war-based deadlines after all!

They just want to set them with Scooter B. rather than the Iraqi government.

CNN is reporting that GOP lawmakers had a meeting with a certain President Scooter B. and…well, they spoke to him bluntly.

Which begs the question of how they have been speaking to his ass up to now…but a bitch suspects they went from kissing that ass to avoiding it like the plague and didn’t bother to pause at blunt talking.

Cough.
GOP lawmakers want to see progress in Iraq by September…but they have no bloody idea what to do if they don’t see progress by September. They have been hammering away at Democrats for allegedly not having a viable plan, but are now lifting the basic framework of the Dems sorta-viable plan and applying it to Scooter B. and his minions...err, administration.

A bitch’s sources (wink) tell me that the GOP Ain’t No Jive Talking Anymore non-binding sorta-ultimatum may also involve lighting candles and a lot of late night shredding.

Gawd, I can so see how that meeting went down! 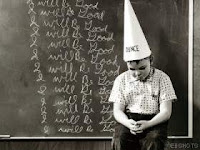 Scooter B. looking pinched faced and avoiding eye contact like you know he used to do every fucking time he fucked something up in the past…and he has fucked a lot of shit up in his lifetime.

Condi having his back on this mess in the face of all logic…but freakishly maintaining eye contact with her unblinking and apparently blind to reality gaze.

Rove looking bitter, pinched of face as well and emitting a foul someone is rotting from within odor.

And all those GOP lawmakers telling Scooter B. that he now has a September deadline and that he’s lost credibility so they no longer want to see his dumb ass on television.
Well pinch me and call me Sharktastic!
My guess is that they got the new polling data and shat themselves.
Shit, this fear of being tossed out in 2008 may have some benefits.
The Iraqi governmental vacation is rather unpopular too. Maybe Congress will lead by example and cancel their vacations?!?
Uh...well, probably not.
The odds are better that Paris Hilton will get a pardon...
at May 10, 2007