A bitch caught the Kennedy Center Honors on the telly last night.

I will confess...pause...I was intrigued by the drama swirling around the...ummm, vocal malfunction....cough...of a certain Jessica Simpson, who was supposed to perform 9 to 5 in honor of Dolly Parton.

A bitch is human after all (wink). 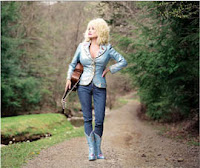 But I would have watched anyway because they were honoring some amazing people who have advanced the arts while managing to entertain and educate in the process.

Shit, she's fabulous! A true pioneer in music, a woman who has led by example by taking control of her career and her art. I've seen Dolly Parton perform live many times and she is always on, always professional and always a joy.

Lawd, what a contrast to...ummm...ouch, right? Well, mayhap some people should have been taking notes instead of requesting cue cards?

Anyhoo, the Kennedy Center Honors was a well edited show. All references to Jessica Simpson were removed...erased in true Stalin-esque style. It never was, I tell you! She never fucked up and flubbed the words to a song that earned Dolly Parton an Academy Award nomination...all because of the magic of television.

And don't we have technology to blame for the dawn of the Simpson Age of non-performance performance anyway?

Shit, if it weren't for the gossip that leaked a bitch would have been unaware that Jessica Simpson had ever been slated to perform. Ummm, except for the fact that 9 to 5 was missing...and it was beyond weird that the song that earned Dolly Parton an Academy Award nomination was not sung. Sorry kids, but that was glaring and obvious no matter how smooth the editing or full of absolute pleasure-based joy the multitudes of celebri-crowd shots.

Lawd, what the fuck were the producers thinking? The Kennedy Center Honors is for the honorees and the audience gets the joy of watching them be honored.

Which brings me back to Dolly Parton and her dignity in the face of Ms. Simpson's vocal malfunction. Dolly looked like she was having the time of her life. I sincerely hope she was, but if she wasn't she sure as hell executed a fabulous performance.

All smiles and charming laughter. The show must go on and a professional knows that going in.

You hear that Jessica?

Somehow this entire episode serves to demonstrate the achievement that is fantabulous live performance...and the skill required to make it look easy and sound great.

Hey, mayhap they should let Dolly produce the show next year?

Dolly is the penultimate performer. She has class and decorum and was graceful toward Jessica after that 'performance'.

Beautiful. I have been a fan since before she had her tv show.

I just love Dolly Parton. She is so good and such a powerful woman. Jessica Simpson should never have been given the opportunity to mess that song up -- like you, I was impressed with Dolly's grace about it. Except, is impressed what you say when someone does as they always do? Yes, impressed but not surprised.

The realization dawned on me relatively recently that the woman responsible for such neo-Mae West quotes as "It costs a lot of money to look this cheap" was in fact a class act through and through. She is one talented and (apparently) gracious lady, a seeming rarity at that level of superstardom. Viva Dolly!

As for Ms. Simpson -- um, yeah. I don't blame her for being nervous, but damn. If you're gonna perform a song in front of the author like that, you better bring it. She clearly didn't bring it, or didn't know where it was to begin with. And, testament to what a pro Ms. Parton is, she waited till she got home, far away from the cameras, to laugh her ass off.

I love Dolly cause she makes me look flatchested. Heh.

Hope your holiday was super special.

I heard Reba McEntire was there; I don't know why she wasn't asked to sing "9 to 5." It's not as though Simpson is considered isn't the next Dolly Parton. That would flatter neither of them; it would be pitiful, actually.

Why on earth was Jessica Simpson (of all the people in the world) even chosen, to pay a tribute to Dolly Parton? Thats just asking for it.

Why not get Tom Green to act out scenes from Marlon Brando movies too, now that we're at it?

The one item of your post that stood out for me was the part where you commented on the appreciation of live performances. In my youth I was lucky enough to have a father who understood this and allowed me to go to as many live performances as I possibly could.

Now I am returning that favor to my kids as a gift to my father. My kids and I have been going to a lot of concerts this past year, and I plan to keep that tradition going regardless of my Ex Wife's bitchin about how much money I am spending on concerts.

The live performance is what clarifies the blurriness that exists between the words "edited" and "censored".

Thanks Bitch...for posting this one!

Happy Holidays to you and yours,

god damn, would i love to watch the footage of simpson messing up, for a snicker.

In addition to being a classy lady, Parton has long been known for her acting abilities, which, according to some, have included acting straight for some time now.

You mean the footage hasn't shown up on youtube? Those Kennedy Center folks must have mad powers.

Nobody performed Dolly's other academy-award-nominated song, "Travelin' Thru," either.

I love Dolly and/or secretly want to be her.

Jessica Simpson...pssh. She's not qualified to do Dolly's makeup, or even be the gurl who carries her wig from the truck to the dressing room.

Who DOESN'T love Dolly Parton? And yes, I'd sure like to have her pipes and presence. What a performer!