A bitch was on the tennis team in high school. I wanted to be the next Althea Gibson (wink)! Each year the team had a tournament to decide who played which position at which rank. I was to

play the girl currently ranked above me and was beyond excited about it. The opportunity meant the difference between Varsity and Junior Varsity…and this competitive bitch was all about wearing the big V on my jacket.

Before the match I noticed my opponent looking illish. She was fighting a stomach bug and really looked worn out. She didn’t look like she would last more than a few games and I fretted over what I would do if she asked to reschedule. Do I press and demand that we play even though she was clearly ill? I wanted to win, right? But did I want to win like that?

That damned honorable competitor bullshit was fucking with me…big time!

If she had asked I would have honored her request and rescheduled. She didn’t, most likely for the same reason I would have agreed if she had. She lost the match…but she finished, a victory of its own.

My friends all went crazy over my apparent big win and were annoyed that I wasn’t giddy over improving my rank.

Looking back I am amazed at how many of my then friends were fine with the she lost so I win thing. Some of them even congratulated me on how lucky I was because my opponent didn’t have her “A” game.

Okay, they didn’t put it that way…a bitch is too old for those Tiger saying to have been in the mix. 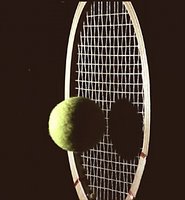 It’s sad, isn’t it, to think of ourselves that way... with our hidden insecurities desperately seeking leverage in the competitions of life because we fear loosing a match that, in reality, will not really be won that way.

As my Grandmere used to say, nothing really changes but the date…
at December 15, 2006

Hmmm -- Kinda reminds me of the Democrats recent win (though I am still happy that the Republicans lost).

Annnyway -- I just wanted to wear the cool tennis skirts.

You made me snort-laugh in my work-based area!

I'm glad someone wanted to wear those motherfucking skirts...

I'm surprised by the inistence on skirts because it looks so undignified when the ladies lift them and pull out their balls.

I used to not care how "my" baseball teams won, and I thought my boss was too nice or not loyal enough because he enjoyed good competitors from any team. Well, it finally sank in that wishing for or not caring about an injury that led to poor performance was horrible not just from me to the player, but because it meant the players I wanted to win wouldn't really be winning. They would, in fact, be exerting less effort than the injured man.

Your grandmother was a wise woman. And you understood honor and sportsmanship.