I grew up listening to James Brown when he was already a legend. 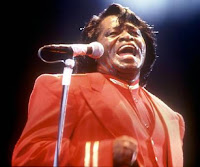 It is James Brown that I think of now, having learned of his death Christmas day. I'm thinking of the man who gave his sweat, human and raw while somehow brilliant even in the embrace of his flaws.

I remember the words that raw voice of soul sang out to me.

The thrill of hearing them and the almost tragic shock that came with it, so rare was the language of empowerment.

We're people, we're just like the birds and the bees
We'd rather die on our feet
Than be livin' on our knees

The music of James Brown didn't ask, it demanded.

Made you rise up from your seat, didn't it?

Heaven's choir has a new soloist...and heaven will never be the same.

...yeah made me cry early yesterday morning when i heard...his music will live on forever.

I hate feeling conflicted about people like James Brown, people who produce the art that I love, that makes me happy to be alive. He was arrested for abusing his partner in 2004...

It makes me sad to listen to his music sometimes, now.