Last night a bitch and C-Money had a laugh festival and we owe it all to Mr. Christopher Hitchens and the editors of Vanity Fair!

You know a bitch loves you like a pain, Graydon (wink).

The new issue of Vanity Fair arrived (late as hell and what the fuck is up with that?) and C-Money flipped through it after dinner. We were each comfortably tucked into our couch-based areas when C-Money, loud as hell from her side of the room, yelled out… 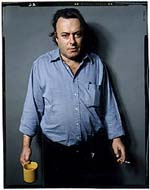 “Oh, hell no! You’ve got to listen to this shit!” C-Money snorted with a laugh.

“Shut the fuck up! Hitchens may have lost his motherfucking mind! Listen…"

“As every father knows, the placenta is made up of brain cells, which
migrate southward during pregnancy and take the sense of humor along with them.
And when the bundle is finally delivered, the funny side is not always
immediately back in view. Is there anything so utterly lacking in humor as a
mother discussing her new child?” Hitchens/Vanity Fair

And then it started…a trickle that became an uncontrollable festival of laughter the likes of which we haven’t shared in forever and a day. A bitch laughed so hard I had to run to the bathroom…my sides hurt….the dawgs started to howl in solidarity.

C-Money, barely able to speak beyond her giggles, continued…

"There are more terrible female comedians than there are terrible male
comedians,” Hitchens/Vanity Fair

“but there are some impressive ladies out there.” Hitchens/Vanity Fair

She gasped some more and then went on.

“Most of them, though, when you come to review the situation, are hefty or dykey
or Jewish, or some combo of the three.” Hitchens/Vanity Fair

“Christ Jesus!” I wailed and convulsed with laughter. “Stop already! I can’t breathe.” I gasped and wiped my eyes.

C-Money, having collected herself, shook her head at the page as if it were Hitchens himself…"Good God man, push away from the Scotch and pull it together."

The Sisters Bitch toasted Hitch (we’re not close, but he just looks like something Hitchified to me) and his fear of placenta and female rejection!

Will he have future installments including, perhaps, the groundbreaking study of how feminists have no sense of humor?

What a colossal ass he is. Then, again, isn't showing your ass, as in "mooning," considered to be the highest form of comedy amongst men?

Ahahahahahaha! I know! It was unfuckingbelievable! You've got to read I, Asshole on the same subject: Fucking Kittens: Not So Funny After All, by Bitchass Hitchens. With illustrations!

Hitchens makes me nauseous on a good day.

Me too! I'm always strangely compelled to read him, though.

wtf? who lets this shit get published?

i hear that all the time, actually... from so many males, how they as a rule can't stand female comics.

fuck that, it's got to be a personal-level thing... some sort of insecurity...

could it be correlated with the fact that the only people in america allowed to publicly - i'm talking publicly like, with their own television special, you know? - spout discontent over race/gender/social/political issues are standup comedians?

i was actually thinking about this watching chris rock last night on HBO... i was thinking, he could be saying the exact same thing, and if it were not labelled as "comedy," or "jokes," it would never see more than a hundred people in this country. in fact, i'm sure he'd land in some kind of shit, too.

that has to have something to do with someone tuning out all women comedians (especially "dykey" ones).

I HAD to read this article. I mean, he sounds like a total ass. After reading it I knew he is! He completely makes a moron of himself and doesn't get it. I consider myself to be very funny (that's usually one of the compliments that I do receive, from BOTH women and men), yet I am a woman. How is that possible?

He himself says that men find everything funny? Couldn't it be that women are more discerning? Our palates more particular?

I've met plenty of sourpuss men in my time who were bitter and UNfunny and plenty of jackasses who THOUGHT they were funny because some overly nice halfwit laughed at their moronic banter.

Morever, if we are talking about the humor, why does he mention that funny women tend to be "hefty", "dykey", or "Jewish" (these are, of course, all pejorative). Why is he even discussing that point? Are we talking about their humor.

How about, I don't know, talking to women and asking them when they laugh the most. Most will say it is when they are alone with their best girlfriends and men are far far away................

Yup. When Hitch gets into a zone like this, I always find myself wondering: "Are these symptoms more likely alcoholism or late-stage syphillis?"

Well, shit...y'all had this bitch laughing at your comments. And some of you are women (gasp)!

Shit, I sure as hell know some dour men...and some funny as hell men...oh fuck it.

What the fuckity fuck?

Someone needs to hip Hitch to the "thou shalt not trifle" commandment...big time!

Doesn't he look like he's ready to deliver something?

I love the way men can comment about women being 'hefty' when they look like...well, like Hitchens.

Hitch writing about someone not being funny is funny all by itself.

"Most of them, though, when you come to review the situation, are hefty or dykey or Jewish, or some combo of the three"

To perpetuate a steretype, don't most male comeidans fit the same bill. What a moron. Obvioulsy he has never seen Kathleen Madigan, Kathy Griffin, and others

I think Hitchens needs some bitch-based correction, don't you?

That, or someone needs to call him and tell him his room at Betty Ford is ready.

My Vanity Fair always arrives in the mail about a week or two after I see it on the newsstands, so it's not just you.

They haven't lost their minds. I'm sure Vanity Fair knows damn well that publishing an article like that will prompt a shitstorm. As a result, lots more people will be talking about, ridiculing and perhaps reading Vanity Fair.

Pissing people off to stir up a reaction is a popular strategy in the new media landscape. Without it Ann Coulter wouldn't exist.

Maybe he was just being humourous!

His work, on the other hand, speaks for itself.

Fuck it, a bitch needed the laugh...

Last night, after reading this, but in an unrelated incident, I stopped off at the video store. Guess whose concert is on the new releases wall? Wanda Sykes. She makes my sides ache; but then, I'm just a woman and don't know what's funny, right?

She made a comment that I thought quite relevent to Hitchens (although, sadly, not directly about him): "I wish that I could snatch his eyeballs out of his head and shove them up his butt so he could see just how big an asshole he really is.”

"... he has never seen Kathy Griffin..."
Who is neither attractive nor comedic so maybe Hitchens has a point.

"Fuck it, a bitch needed the laugh" ergo you must find him attractive,case closed!

Are you still there?

Good Lord man, a bitch must have hit a nerve (wink)!

And there isn't enough Scotch on earth to make Hitchens...err, you...attractive.

I'd like to include this in the next Carnival of Feminists, ok? Cause this is funnier than anything else I've read about it. ;-)

Go forth and include!

Clio said it best: "What a colossal ass!"

I feel bad for these brilliant men who fear and loathe women. Reminds me of Nietzsche.