Let's jump right on in, shall we?

Today this bitch is pondering the coverage of the Gates Confirmation and the Iraq Study Group report.

What the fuck? Not only did CNN break in with that shit as if man had landed on the moon, they then followed up with hour after hour on what Gates saying that shit means.

A bitch would like to think CNN’s dumbing up of the news is in response to the intellectual capacity of the masses, but the reporter I watched yesterday seemed confused as hell. A frown was affixed to his face…he pursed his lips and paced his questions to convey…ummm…well, how serious he was about uncovering something, hell anything in the 30 minutes with multiple commercial breaks segment he’d managed to carve out for his dumb assed self in primetime.

“What does Gates saying we’re not winning mean?” He asked the retired general of the moment. “Does this signify that Gates is his own man and will speak truth to power?”

From heaven to hell and back again on the red eye, are you fucking kidding me?

Give us a gasp followed by an “oh my”, chil'ren!

The ISG calls the situation in Iraq “grave and deteriorating”.

For the love of vodka, how the hell is that the story? Isn’t reporting how obvious those announcements are part of the analysis…part of understanding just how detached the West Wing is and has been from reality…shit, part of understanding how we got here and how we will get out…how we can avoid this shit in the future?

I suppose a bitch should be thankful to the Iraq Study Group for stating the obvious in small words.

But the news is not that the situation is grave and the Iraqi government is hanging on by a thread…no, the news is the view over my shoulder…a look at what was and what now is the party line and what that shit means. 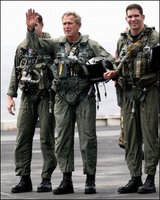 Somehow imminent danger and WMD morphed into fighting Al Qaeda there rather than here. That shit was re-branded as building a strong and vibrant democracy to serve as an shining example to the Islamic world that was sure to inspire a wave of freedom loving change in the region…but was eventually re-launched as fighting an unanticipated insurgency being fueled by Al Qaeda only to shape-shift into fighting an unanticipated insurgency being fueled by Iran and/or Syria with a dash or two of an emerging civil war and growing sectarian violence thrown in.

America needs to unite with our global allies and make new friends in the region to support a diplomatic effort to help Iraq achieve long-term security with political reconciliation, thus prevent regional destabilization that would ultimately threaten our national security.

Fade to black as a bitch clutches a tattered copy of The Powell Doctrine to her chest and pushes away from her desk while whispering "FUBAR" like Charles Foster Kane gasped Rosebud...
at December 06, 2006

OK so you did it again.....political commentary at its best.....Maybe we need to get this post on video and on YouTube.com.

"I suppose a bitch should be thankful to the Iraq Study Group for stating the obvious in small words."

Exactly what I thought while watching Baker.

What I want to know is: why did none of the Committee ask Gates about his past history of cherry picking intelligence for his boss and if he intended to do that again? That seems to me to be much more important than his admitting what the world and his wife already know.

I thought I had awakened in an alternate universe or something. Is this a challenge on how many different ways we can restate the obvious?

Why do we allow the media to treat us like homogenized mindless chattle?

Thanks, again for letting me know I am not alone.

FUBAR will now forever resound in my head as "Rosebud", when I hear it... ha!