A quizzical regarding sex...

If premarital sex is normal...

…so most Americans get their groove on before marriage (assuming that this research factors in lesbians and gays even though marriage isn’t an option…but sex is, so…hmmm)…

…then why do we have a sex education program tailored to the rare sexless before man on woman sanctified matrimony securing soul?

It makes no sense…like putting the cart before the horse, trickle down economics or Brittney Spears.

But all those folks fucking pre-marriage have to know…and most of Americans are doing that so most Americans should know, right?

So who the hell doesn’t know? 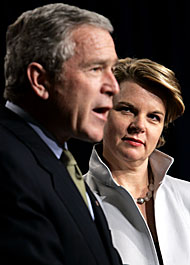 Well, this is alarming! Just imagine this percentage applied to something else…most Americans drive drunk, for example. Would our public policy people (Lawd, say that ten times fast) debate the need for seatbelts and comprehensive driver’s education in the face of those numbers?

Shit, knowing them this bitch won't take that bet.

It is possible to hold out. I'm still a virgin in my 30's (sexless not by choice but by circumstance).

Even if i'm among a very small minority. (Damn...everyone from the teeny boppers to granny is getting their grooves on, lol).

Maybe I should apply for a job with the Bush administration as poster boy for abstinence only sex education.

But then again, it's the Bush administrations economic policies that have contributed to my sexless condition. How ironic.

Everytime I get depressed about it (which is often) I just think of former L.A. Laker star AC Green. He was about 38. That's my new target age... If I don't lose it by that time then it's probably a lost cause.

Because if sex is 'America's Pastime', then that means that NPR are going to make boring, pretentious audio-docs with old men talking about how Babe Ruth had sex in 1932, and about how modern sex in concrete stadiums just isn't the same.

And that would be wrong.