No justice and no peace…

He committed no crime. 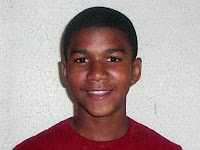 He was not armed.

Though some may claim there was a scuffle…the facts emerging now indicate that Trayvon’s murderer stalked him for a significant amount of time before approaching and then killing him.

And I’m not surprised.

I can’t even describe to you how hollow it is to not be able to achieve surprise.

I live with the constant fear that this type of shit will happen to my cousins, friends, or my 42 year old brother who often looks like he’s up to something or on something because he’s autistic.

No, I’m not surprised.

Outraged that the killer may find shelter behind Florida’s Stand Your Ground law.

…that a murderer walks free.

…that the Martin family had this beautiful young man taken from them.

The living are left to demand the arrest of his killer...justice stands naked before the world, every flaw on public display...and another mother clings to memories of a child gone to God.

This is a heinous and outrageous criminal act and the police handling of it is, if anything, more egregious.

The additional sad fact is that there was likely evidence at the scene to clearly establish that this cold blooded murderer was exactly that and his story of self-defense utter bullshit, however, as it doesn't appear to have been treated as a crime scene that evidence won't be available after the fact for the FBI or any other outside agency investigating this horrendous crime.

I signed the petition a few days ago but the fact that a petition is required to initiate any measure of justice is beyond deplorable.

Yes, he was suspicious ... a 17year old boy ... a child walking in the rain while armed with skittles and an iced tea.

I am heartbroken. I grieve for Trayvon and his family. I grieve for us. I grieve for me. I grieve for all 17 year old children on the verge of adulthood learning that their lives mean no more than that of an ant. Trayvon was a child. Trayvon was a student. Trayvon was a child....A child! I shudder knowing that a being alive could believe in his worst days that a child with a bag of skittles and an ice tea was a threat, and that he could use that as an excuse to stalk, hunt, attack and shoot in the chest a child seeking only to get home out of the rain. Trayvon should be in school right now, planning prom and looking forward to graduation and college. Instead, Trayvon will forever be crying out for our help in our memories. For someone to save him from what truly should make us all afraid.

This murder is an indication of how far America has not come. A black person's life still does not mean much. We are still having to fight for civil rights in this racist society.We are terrorized, criminalized , and marginalized. We are constantly told you don't belong here. I am tired of the people who commit these acts against us. Whether it be an individual, the media or the government. This nation works daily to make it seem as though we are the problem. We are not the problem.

This is outrageous on so many levels but most of all such a tragedy for this family who have lost their son. These laws must be changed and attitudes must be changed to avoid more black children being murdered with society's ok.

This past Saturday, our family had the opportunity to attend the Reason Rally 2012 in D.C. Because we have kids, we couldn't simply sit on the Mall the entire time - we had to move them around and let them get food/exercise etc...which gave us a couple of hours to play tourists. Aside from getting to see some of the expected tourist sites, and two of the Occupy D.C. locations...we also got to witness part of the "No Justice, No Peace" protest. I wish I could describe the energy there...it was electric. We couldn't stay long, because we had to get back to the rally to see certain speakers we wanted to see before catching our flight back to Atlanta. I shared the link with you, because my husband's pictures were really pretty awesome, and thought you might enjoy them.

We're going to be passing through STL next weekend, then again on the following weekend (probably stopping overnight on the 2nd trip coming back home). I'll be sending you big love from my best friend's house. Know that you are an inspiration! <3

Trayvon was unarmed and FOLLOWED by someone who decided to be upset. Still not understanding.