Where we stand after the Great Primary Showdown of 2010…

This bitch didn’t watch coverage of the mid-term primaries last night…’cause some serious ice hockey was on the telly and I’ve got my priorities straight. 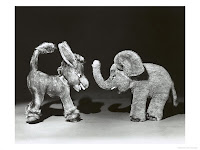 But I easily caught up on what's what this morning.

Senator Arlen Specter will not be returning to the Senate once he finishes this term.  The former Republican turned Democrat lost his Democratic primary battle to a certain Joe Sestak.  Sestak is pro-choice with a 100% rating from NARAL Pro-Choice America, so reproductive justice advocates in Pennsylvania need to ramp it up and turn out the vote for him this November.

In Arkansas, incumbent Senator Blanche Lincoln received a message from the progressive masses…she’ll face a run-off against Lt. Gov. Bill Halter to determine who the Democrat will be to face Republican John Boozman, who won the GOP nomination yesterday.

In Kentucky, Rand Paul delivered a Tea Party victory.  A bitch doesn’t know much about Paul…but his public statements against The Americans With Disabilities Act are enough to turn my stomach.  Suffice it to say, Kentucky will have a choice to make in November and that choice will have consequences…let’s hope voters look beyond the spectacle at the doctor's policy positions.

Now to the race political junkies were anxious about…despite a shit-load of money pumped in by the GOP, Mark Critz defeated his Republican challenger to win the special election race to fill the House seat vacated by the death of Rep. Murtha.

This truly was the race to watch last night…unless you were watching hockey.

Democrats were testing to see what works as they battled to hold on to the blue-collar Pennsylvania district where they have a 2-to-1 registration advantage.  The GOP was testing out the effectiveness of the Obama = evil, health care reform = socialism and Pelosi = Satan message.

If the Democratic Party is formulating their survival plan based on Critz’s road to victory, we who would like to see them take the reproductive choice plank of the party platform seriously have a serious problem.