Update on The Jena Six case…

I too was thrilled to hear the news that Mychal Bell’s conviction was vacated on appeal.

But the battle for justice is far from over. Five teens still face charges and Mychal Bell could still be charged as a juvenile.

It is the 50th Anniversary of the Little Rock Nine, who bravely walked through the doors of a segregated public school to take what had been previously denied them...an education. 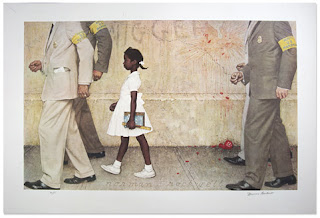 Education was a key front in the battle for equality 50 years ago and it still is, because there is nothing The Man fears more than the people empowered with knowledge.

For every Jena Six there are young people we haven’t heard about…without representation or support…being denied a decent education and equal justice under law.

"Education was a key front in the battle for equality 50 years ago and it still is, because there is nothing The Man fears more than the people empowered with knowledge."

EXACTLY! The corpofascist bottom feeder can not take advantage of ANY class that educates themselves.
They HATE education for the masses and will do what they can to stop it. "No child left behind" is typical corpofascist BS that superficially sounds like something of substance but only further erodes the educational system with more rules, regulations and paper work.
oops, am I yelling again?

The struggle is still about education is spot on.

The MSM is still ignoring the elephant in the room, only the EU papers get it right.

Oh, and I hope you don't mind if I repost this over at Sirens ABB.

Right along with unspoken racism in the form of locking car doors when a black man walks by.

No matter that he is in an Armani Suit.

See that shit all the time here in DC.

Yes! I was so happy to hear about the ruling, but yes, the other young men are still there. I hear they expect more people for the protest than the population of the town. Wonderful, but has me nervous -- things can spin out of control so quickly, and there will be a lot of scared locals there...

Education is absolutely the key. My new parents' group is going to make our second presentation to our school district tomorrow a.m., for just that reason. Changes need to happen now, because Jena could happen anywhere. It's amazing how much resistance you run up against though, people want to say "not in 2007" but it's still here.

Here's hoping for good things for the rest of these young men...

I can only hope it is because the networks were so embarrassed by the event that they just did not report on it.