Brother Rob Thurman joined this bitch last night for a dinner of barbeque ribs and presidential insanity. I forgot the corn bread (wince) but the fantabulous slaw made up for it.

After hearing all about Brother Rob’s fantabulous trip to Montreal (we’ve got nothing but love for ya, Canada!) we settled in with ice cream sundaes topped with hard shell chocolate yummification and watched Scooter B. get his speech on.

Thanks to the blessing of TiVo, which allowed us to pause and scream at the television over and over again, it took a good two hours for us to get through the 20 minute address. 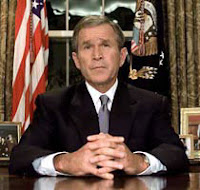 “Good evening. In the life of all free nations, there come moments that decide the direction of a country and reveal the character of its people. We are now at such a moment.”

Scooter B. went on to spin that the complete lack of political progress despite some success in addressing the violence associated with the civil war in Iraq had been the goal all along…everything was unfolding as he had planned…and we should just trust in the leadership of the world’s worst leader.

Around this time a bitch decided to toss the score card and just hit the vodka cran as needed.

“Yet Iraq's national leaders are getting some things done. For example, they have passed a budget. They are sharing oil revenues with the provinces. They are allowing former Ba'athists to rejoin Iraq's military or receive government pensions. And local reconciliation is taking place. The key now is to link this progress in the provinces to progress in Baghdad. As local politics change, so will national politics.”

Brother Rob erupted with a verbal

I’m not shitting y’all, he started speaking in tongues!

“The principle guiding my decisions on troop levels in Iraq is "return on success." The more successful we are, the more American troops can return home.” And in all we do, I will ensure that our commanders on the ground have the troops and flexibility they need to defeat the enemy.”

“He's crazy.” We whisper in unison.

The vodka crans were coming one on top of another.

Rob went home and this bitch prepared for bed, but I was dead sober despite all that vodka followed by cran.

Mmhmm, I was wide awake and seeing clear as hell.

With this speech Scooter B. gave the green light to years of war...to an inheritance of combat...and to a prolonged policy of occupation.

He is saying to all of us “go ahead…make me” and banking on his few remaining minions to ensure that any real change will not happen while he is still in office.

My fellow Americans, we do face a moment that will reveal our true character.

Or are we King George’s subjects after all?
Blink.
We are a nation standing at a crossroads.
Do we take a stand against the divine right of presidents?
Or do we damn it all to hell?
at September 14, 2007

Any thoughts on what a good next step would be?

Ok ...i watched too, and feel positively soul sick this morning. Then this morning i watched both Democracy Now and INN report on Free speech TV. Dem Now does have video stream. Amy Goodman is kicking ass and taking names as usual. On the Internation News Network (they do have a web site) my secret love Conservative Bruce Fein - you can see him on Moyers Journal too in a vid stream if you missed his and John Nichols on IMPEACHMENT....
anyhoo..seems Bruce just lately has been lobbying the Senate Judiciary committee hard for a special prosecutor..
GET THIS : bottom line, no one on either side wants to work with eachother.

He says in answer to your question Shark Fu - basically IF they do not move to restore Checks and Balances NOW - our congress has surrendered and yes made us the "subjects" of an Imperial Presidency for yrs to come. This is nothing short of the end of amerika as we knew it. Its that serious. (And the Dems, have failed us miserably my words)

Bush is a mad man as are the Neo/libs and cons. The congress is totally complicit. TOTALLY.

My heart is breaking this morning.
I have called all my reps repeatedly..time and again.
Next Step :
Its time to raise money locally for Buses to bring us all to Washington. Its past time. They may not listen..May not -hell they won't but we must go. And we must also think of ways to have General Strikes. If we own stocks check out your funds..if they are not on Mother Jones listed - try to move them. We gotta starve the Machine.

This reminds me of Daisy Buchanan from 'The Great Gatsby',create a mess and leave it for others to clean up.
With slogans that Chairman Mao would envy like 'way forward' and 'return on success',we contemplate a Korean model for our Iraqi engagement.
Our president never encountered a problem whose solution could not be handled by the military. He even suggested this as a solution to his Katrina problem.
We are going to have to discover a way to enlist the world community in humanitarian aid to the refugees of this conflict and provide for massive Iraqi infrastructure repair.
A forensic audit of the expenditures for the war needs to begin immediately. Bush needs to be held accountable for his part of this debacle while he's still in office.

I heard a story about Scooter B when he was a young fella. He was angry with Bar for not giving him the attention that he thought he deserved. Bar was in a car leaving the family place. Scooter B was on a bicycle riding next to the car that Bar was riding in. Bar's car slowed, and Scooter B got his bike in front of the car. Bar's driver tried to go around Scooter, but the kid kept moving in front of the car so she couldn't get around. Finally, Bar got free and Scooter B rode his bike after her, screaming the whole way until she was out of sight. He was not a child at this time. He was a young man. It's a true story.

The SCLM is praising Scooter B. on his "success" to return troops from Iraq by next summer down to the same level (~130,000) as last summer.

I missed the speech. I figured it was going to be bullshit anyway, so why bother listening to it.

Now which makes more sense to you?

found the story about the bike
this is our leader

Around the same time, for the 1972 Christmas holiday, the Allisons met up with the Bushes on vacation in Hobe Sound, Fla. Tension was still evident between Bush and his parents. Linda was a passenger in a car driven by Barbara Bush as they headed to lunch at the local beach club. Bush, who was 26 years old, got on a bicycle and rode in front of the car in a slow, serpentine manner, forcing his mother to crawl along. "He rode so slowly that he kept having to put his foot down to get his balance, and he kept in a weaving pattern so we couldn't get past," Allison recalled. "He was obviously furious with his mother about something, and she was furious at him, too."

the rest of the article further describes the behavior that he is showing now..

The Dems could stop the insanity instantly, just present NO BILL to fund anything but bringing the troops home. No bill to fund the war, no veto, no war. Veto bringing them home, bet that'll play well with the GOP. Our Party's leader vetoed bringing your kids home from Iraq. Worth a try. The withdrawal can be funded just fine out of money already in the defense budget.

Off topic..you saw this I hope:

OT:Judge tosses conviction in Bell Case (He's one of The Jena Six)

I started to watch the speech, but hit the clicker because I just couldn't take it. I could feel myself starting to babble incoherently (read:speak in tongues) and I didn't think my family needed further excuse to have me commited.

This is my first time here, and I'm hooked. Love the blog. I'm subscribed!

Justin Franks a psychiatrist, wrote a book awhile back, actually apologizing for his breech of ethics by diagnosing from afar its called Bush on the Couch. Scooter B is a very disturbed man. But i got to just say this after watching MOYERS last night I am reminded how much Condisleeza failed at her job. Her firing Richard Clark. And the stupid Idiot rethugs wanting more to go after the Clenis, than protect this country..It is just pitiful. Then another show last night on PBS here about the Cronyism in Homeland Security Contracts to the tune of Billions...

Can we fix the government. Can we get some integrity there ? Man Scooter and the thugs have been reckless. Exploiting for terror and hatred for political gains jeeze. I want to see them brought to the Hague..i really do. And then a Gov. Audit where we deconstruct some of this shit like Homeland Security and fund the systems we do have better. Give the contractors , the auditors the staff and money they need to get us back on track.

I'm with dude who'd rather watch Cartoon Network. I think we long since passed the Tipping Point. Our country is internally decimated, we've acceded the destruction of a major north American city and then blamed the poor and sick who couldn't escape. We've enabled a 12 year old President who sticks his tongue out at absolutely everyone. We have no privacy. We may not be in a police state yet, but given our responses to prior threats, it's coming, as sure as it's Saturday right now (although probably Monkey Boy would say it's Sunday and the press would enthusiastically endorse this).

i did a lot of screaming too-- did you also notice the clever segue into iran!?

that dude is crazy-- someone needs to stop him!

ABB, great use of the visual medium for this post! So appropriate woman :)

Thank God The Shrub spoke for less than 20 minutes..I couldn't take much more of that Asshat.

Hmmmm... all this talk about Scooter wanting to be king.. makes me wonder if he and Chavez aren't half brothers...

I like how the speech coincided with the March on Washington yesterday -- a major event, months in the works, folks came from all over, and which our media did a shit job of covering. My college daughter was one of the organizers. The govt/police really tried to squash the premarch publicity, and the media controlled what we were told about the actual event. The reports I was hearing from her were not seen on the TV. But Dubya gets his TV time to get his insanity out there.

Loved the pic of Hannibal Lecter. We'd be better off with Dubya in that crazy mouth muzzle that Hannibal wears...