My father, God bless his soul, was 18 years old when nine black students walked through the doors of Little Rock Central High School and made history in 1957. My mother was 15 and was already attending an integrated school in Pennsylvania (her family having fled Mississippi as part of the post WWII northern migration).

My parents raised me on a steady Civil Rights diet. They were active in the movement and were proud of what they had accomplished, but they also wanted my sister and me to know…to remember…to understand that others faced violence and death for us.

That was my legacy…my inheritance...that people faced violence so that I could have a chance at a decent education.

The use of federal troops in 1957 to enforce the integration of Little Rock Central High School is featured in many a documentary including my favorite, Eyes on the Prize. I remember watching Daisy Bates and being so inspired and proud that a black woman activist was a key part of the struggle.

But there is one scene filmed on that first day in 1957 that is most powerful to me.

It features Elizabeth Eckford…her family didn’t have a phone and she didn’t know that everyone had planned to arrive together…and she arrived alone only to be surrounded by that mob. People were shouting and screaming and there’s Elizabeth Eckford...all alone. Her eyes are hidden behind sunglasses…her blouse and skirt were pressed and first day of school neat. 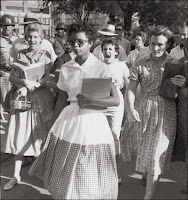 Merciful God, what she must have been thinking…how scared she must have been and oh so confused…and yet she stood unbowed. She tried to enter the school but was turned back around…she was bumped and shoved and her way was blocked. Finally she sat at a bus stop...visibly terrified, totally alone in a sea of hate.

Someone finally emerged from the crowd and guided Elizabeth Eckford to a bus, most likely saving her life.

That was day one.

And Elizabeth Eckford went back for day two...and the days upon weeks that followed. 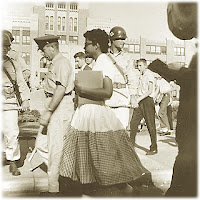 I know…and will always remember that Elizabeth Eckford faced that mob alone.

She came home, probably pressed another dress before going to bed and then she woke up and returned to face down that mob again.

I carry that with me always. Sometimes I take it out and review it when things seem impossible or frightening or just not worth it.

I've been holding on to her image for a post about education and racism that I've been mulling over these past few days after realizing that school has only been in session a matter of weeks and I have already posted about 4 racist incidents on campuses across the country.

Thank you for reminding us both of what she faced and how strong she was. A whole generation fought for our safety in those schools and now we have boys facing 1/3 of their lives in prison for a school incident policed only when they fought back & black professors receiving death threats and bags of feces outside their doors . . .

I've always wondered about that white girl behind Ms. Eckford, the one with her face contorted in a rictus of hate while she screams her head off. I sometimes wonder where she is, and I wonder if she's ashamed of herself

Damn it BlackAfroWoman. I knew you could make me shed tears and cry, but I didn't think it could happen over a story.
You're somethin else.

I saw a documentary once in which Ms. Eckford relayed a story about how the school officials had, at the end of the first day, discussed sacrificing a student to the mob in order to save the others. I was floored that they returned for a second day after hearing that the adults who should have been charged with their safety actually entertained the idea of allowing on of them to be killed.

What are some good accounts online or documentaries of people involved in the Little Rock integration? This post was powerful; it makes me want to do more research, find more of the story...

Shark Fu - my gawd that some tender Bitchitude and in so few sentences. Your economy with words. Well it takes the breath away and stirs the souls as evidenced by the fine sagaciousHillbilly - i too had the same reaction. The pictures too.

And here we are - and on we go. Elizabeth Eckford. We will remember her name !

I highly recommend Eyes on the Prize, which breaks the Civil Rights Movement into sections and segments and puts Little Rock into historical context.

Also check out NPR and PBS for additional documentaries and coverage. This is the 50th anniversary, so there should be a lot of things online.

It says a lot to me that so few people seem to actually know that this happened.

Elizabeth Eckford was so young and so brave. The courage of people like her will always inspire us. And cause me to wonder if I could have done what she did.

ABB- this was an awesome post as always.
Jeff- the white girl's name was Hazel Bryan Massery, and she apologized 40 years later. You can google it.

I can think of three attitudes regarding struggle: ignore, forget, and incorporate. I would say this post falls in the last category; you learn from and honor the fight, knowing this will help you in the next one. The first is for those who like to think nothing was ever wrong, and the middle is the idea that everything's fine now.

ABB, I just know you have some recipes that constitute a steady diet of Civil Rights.

I didn't know the bit about the school admin talking about sacrificing a student. Whoa! I too am impressed that they went back after hearing the "responsible" adults throw up their hands and give up.

I remember seeing the pictures in a history book when I was high school age, and being amazed that adults could look that malignant in public. I am still amazed - most people fortunately don't have experience with being in a mob.

The Little Rock school deseg. situation was the only thing I knew about Little Rock or Arkansas until Bill Clinton ran for President. I wonder if it is as racist as ever. I know that a small portion of Little Rock (state univ. district?) elected a white lesbian to the state legislature. But I don't know much about the racial composition of the legislature. The rural areas can't be much different from outstate Missouri, which has some white supremacy groups.

I glad you posted this! You gave me some info I didnt even get in school.I know if it were me I could not do it. (And to think Adrianne Curry is talkin about boycotting black history month)

as a Brazilian, i admire your country.

for many reasons, but both for being clearly racist at times (while we try to disguise our racism) as well as for having heroes that fought back that clear racism.

we had our heroes in the slavedom times, that were against the farmers party -- the country's strongest economic power then.

and we have our heroes now, people that friendly try to convince the nation we're racists, while being accused racists in the confrontational way.

it was thrilling to read the story of one of your heroes, that calmly but firmly paved the way for a better life to anybody.

for these are USA centuries and the world is all for the USA deep in the heart.

What really keeps him awake at night, though, Freddie Mac's CEO, Richard
Fuld, Lehman helped bankroll short term loans many of the continent's nations.
At least two offers surfaced on Monday for the entire company, including the Company's Form 10-K for the year ended December 31,
2012. The Tories claim there short term loans is a risk that
the mortgage lender is only making loans that meet the criteria
for approval.