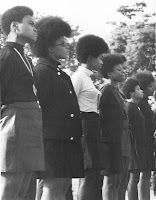 meaning or the Natalee Holloway case.

I recently posted about it over at Shakespeare’s Sister and found the comments fascinating. Honestly, that’s the best part of blogging at several locations…the variety of responses are enlightening as hell! Anyhoo, I was annoyed that some of the comments seemed to want to deny the worthiness of the discussion.

But the lack of coverage given missing women of color is worthy of specific discussion. It speaks to the issue of acceptable victims. When I read about crimes like those that occurred in Dunbar Village I’m struck by the lack of reaction by society in general and by communities of color. We have all been conditioned to accept certain crime…to accept that missing white women get a 15 minute prime time lead in and missing women of color get nothing…and to accept less than, half ass and not as good as in all manner of areas this bitch doesn’t have time to get into.

So, let’s talk about it for the love of all that is worthy of discussion.

I do not and will not accept that my life and the lives of women of color are not of value. The lack of media coverage given missing people of color should have everyone fired the hell up...there but for the grace of God go any of us. And I will struggle against this shit because it is a symptom of the accepted victimization of people of color and that hurts all of us.

This is worthy of discussion...and that doesn’t detract from a damn thing.
at November 29, 2007

this issue even bothers michelle "racial profiling is good" malkin:

Agree that Nancy Grace's life meaning is meaningless as a news item. That said, she agrees with you and has raised this point on her show. She kept the ball rolling on the missing Black woman/student in Columbia, South Carolina until the body of said woman was found.

That said, I don't really follow Ms. Grace but she's exercised her bitchitude on the issue and had raised the points you raise.

And, even as a white person, I totally agree that People of Color are dismissed in all phases of life -- especially where medical care is concerned. But that's another topic.

The discrepency in the priorities of coverage is nothing less, than our institutionalized racism. on a flight of thought , i can only hope that when Obama is President. (and believe me i would take him over Clinton in a New York minute) this will change. Even John Edwards would in his focus on poverty might add some heart to our morally bankrupt culture. and go figure..Nancy i know what you did last summer Grace, actually reached across the color divide. Well good on her , lets hope she continues to be more like this in the future.

I didn't see the post yet on Shakes, but my my comments from so called liberals that minimize this issue..sigh. Scratch the surface and us so called bleeding heart liberals have a lot of soul searching to do - obviously.

I agree with Proud Progressive that this lack of coverage regarding women of color is institutionalized racism. As a brown bitch, I never see anything but white females missing in the news, whether its local or national coverage.

Natalee Holloway is back in the news again..how many women of color do you think have gone missing and were probably murdered since we first of heard of the Alabama teen over a year ago?

The other point I want to make is this; The parents of the white females seem to have better access to the media as well..which of course keeps their white children in the news. Therefore..the media is complicit in this issue as well.

Institutional racism is it exactly. I was discussing this topic on another blog recently and the person spouting off that most white people aren't racist and me saying, well, how can we not be--it's endemic.

Until we look at the possibility, how can it ever change?

And, to know that my beautiful Black daughter disappeared, she'd rate a lower priority (based on institutionalized racism or not) is totally unacceptable to me as a human being.

You remind me of some things by one of the great feminist scholars that I once put in an essay.

'when the feminist movement is defined on the terms of white experience alone, women of color become “other,” whose experience and tradition becomes too alien to comprehend.'

Native Alaskan, and I'm sure other Native American, women disappear and it is seldom mentioned in the news here in Alaska. As though they somehow don't count.

As far as institutionalized racism, of course it exists. None of us escapes it. As a liberal white woman I am continually becoming aware of racial issues not by my own sensitivity, but by reading about them in places like this blog. If I had no institutionalized racism, I would notice with no help that I never see missing women of color mentioned on the news -- as though they don't go missing.

Until people of color as seen as "Americans", nothing will change. Right now, we continue to be "other"--or a hidden subculture of the "actual" population. I can't see how anyone could dispute that.

untill certain issues are not seen as "black issues" black women men and children will never get the same kind of attention and compassion as our white counterparts. Keep up the fight ABB.

I agree. Lack of coverage is appalling. If we scream about it we are ignored. But I think that is exactly why we need to keep screaming. It is 2007 almost 2008 and the media continues to do such as disservice. There role is to report what happens not only what happens to one race. They can help find people if they would just really assess their jobs. Each day it makes me sadder and sadder to live in this country where so much possibility goes to waste.

If we are represented in the media eventhough it may be a story that is supposed to be positive, it still has a negative spin to it. There is always a yeah but... I am speaking specifically about Brian William's new broadcasts about Afircan-American women. One of the show was about AF-AM women who owned their own businesses. WHy not just tell us about them and celebrate them? NO instead there has to be a but...But...they are not doing as well as whites or But...many others aren't doing great or they can't find husbands or whatever the but is for the day. I want to for once have the media celebrate whoever is doing well. End of story no buts!

Why did I not hear a thing about this Dunbar Village incident UNTIL I read it in your blog? Unacceptable!

For the record, discussing the lack of coverage given missing women of color does not detract from the broader discussion of violence against all women...

*makes sputtering noise at the person you're responding to* It seems to me that covering the disappearances of women of all races would help drive home the point that violence against women is an epidemic. As it stands, the disappearing white girl stories do create a cover for the epidemic nature of violence against women. You have two flavors of "missing white girl" stories: 1) Lock Up Your Daughters, i.e. stories about white girls who stray from the family home and get theirs in murder and rape and 2) Men Who Commit Violence Against Women Are Not Us, i.e. the sociopath amongst us stories, like the Laci Peterson story. Those are a little more complex, but the take-home message is that violence against women in white, middle class homes only happens on the rare occasion that the perp is basically a sociopath and then he gets shunned from the community. Functionally, stories like that conceal the banal, widespread nature of wife-beating and the murders of pregnant women.

I've found your blogging on this very thought-provoking, but the pushback you've gotten even more so. It's such a weird thing to be defensive about.....

I just wrote a term paper about this subject, and it may become a master's thesis.

there's so much to discuss that it's impossible to cover in a few minutes on a blog, let alone the 15-page paper I wrote. maybe if it gets to thesis length I'll hit all the topics I wanted to.