‘Tis the fifth of November, y’all…and America is one year out from the 2008 elections.

Flock of bitchitude! Pause for a moment of encouragement for all of us who are politically involved….

…and then buckle up, ‘cause this ride is going to be bumpy as hell.

A bitch caught the Sunday morning chat shows this weekend. As usual, I tucked into a weekend breakfast of yummified cheesy eggs and potato with onion chased with plenty of coffee tinted by 1% organic milk (wink).

Anyhoo, a certain George Stephanopoulos sank his brilliantly whitened teeth (the glare is a wee bit blinding...ouch) into the realization by the Democratic Party that there are currently as many single women as married women in America.

George tossed that nugget out during an all male round table and he did acknowledge the lack of women to discuss the anticipated power of the women’s vote in 2008, which he claimed was due to the luck of the draw. A bitch is dying to know how that draw process goes down. Mayhap they should drop a few more women’s names into the lottery…hmmmm?

Now is the time, my sisters… 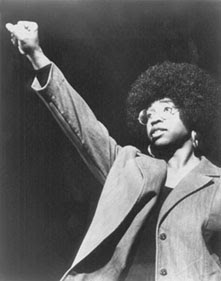 …to make these candidates work for our coveted because it’s crucial vote.

A bitch isn’t talking about ‘Be a Part of History’ work.

No, my ass is talking about “You've got big dreams? You want fame? Well, fame costs. And right here is where you start paying in sweat” work.

Don’t let anyone tell you that we the people are wrong to demand specifics. For all the debates and complaints about how elections are run in this country, those shouting usually fall silent on the most damaging phenomena…the reluctance on the part of voters to truly interview those who would be President.

Mmmhmmm, we the people are part of this problem but we are also the key to the solution.

They want single women to vote like we’ve never voted before?

Well, this single woman wants comprehensive sex education in public schools, a complete overhaul of all things education-based and that shit had better be funded…I want my mentally disabled brother to have Medicaid funding and I want Medicare to negotiate on the price of prescription drugs because they’re spending my motherfucking money like Britney Spears at the grand opening of House of Wigs.

I want disaster relief plans for every state in the union and I want that shit funded too, because a person’s survival shouldn’t depend on where they live…this is America, for the love of all that’s holy!

I want immigration reform rather than race baiting bigot arousing rhetoric…I want Warren Buffet to pay more of a percent of his income in taxes than I do (blink)...I want the fucking truth about Social Security so I can prepare to take care of me and mine…and I want a moratorium on the death penalty.

This bitch wants an equal wage…I want to know that when I take a prescription to a pharmacy I won’t be asked to take a morality quiz…I want a fucking plan to end the War in Iraq and specifics on how we’re going to clean up the ocean of shit that is American diplomacy today.

I want a War on Poverty and I want to live long enough to see a HUGE Mission Accomplished banner raised above the White House announcing victory.

In short, this bitch wants what’s owed to me…life, liberty and the ability to pursue happiness.

And if a candidate wants my vote right now is when they start paying in sweat…
at November 05, 2007

So I'm thinking we elect you to pose the questions in the next debate. All your "wants" are right on.

I am with Cowbell, no more of Ms South Carolina answers to the big questions, I want some action!
*pumps fist in air to no one in particular*


Baby, your bitchitude is contagious!

Yes. All of that. A candidate who will uphold and restore the Constitution. Who will support the people instead of the corporations. Who knows the difference between ethical and not-illegal-yet. Who will never need a retroactive law to protect past actions.

I just want to know who these single chicks are, and where I can find them.

Yes I know. Your questions are much more noble than mine. And more important.

The scary thing is that I still vote :)

Given the caliber of those who go in to politics -- on every level -- we'd all do well to wish in one hand and shit in the other, and see which fills up first.

Actually, most politicians are shit, so it fits.

I get so discouraged with politics.

Plus, we're a full year out from the elections, anf god damn it, I'm already tired of the game of catch-me-fuck-me I see going on. Not one -- not ONE-- of the current crop of Presidential wannabes is someone I can support. I have no faith in any of them.

They're all out for themselves, and to screw the rest of us -- actively screw us in most cases.

Sadly I agree with CrankyProf. I can't support any of the idiots trying to win the 2008 beauty pagent.

Can't we add in "none of the above" as a category for the presidential election?

I am beginning to believe that anyone currently in any office should be fired and not allowed to run again. Then we will elect a whole new crop and attempt to start over. Most everyone currently in office is only out for themselves. I know that we would accidentially catch some of the (very) few good ones out there but it would SO be worth it!