My initial reaction was that this was yet another Robertsonian moment. I mean, the man is fucking insane and has been know to indulge in public displays of insanity before.

Which, come to think of it, casts his endorsement of Guiliani in quite a different light. 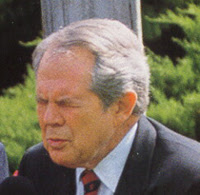 Pat Robertson has said that feminism is a socialist anti-family political movement that encourages women to leave their husbands, kill their children, practice witchcraft, destroy capitalism and become lesbians.

He blames gays and lesbians for no fault divorce and abortion…blames the Katrina disaster on legalized abortion…believes that the September 11th attacks were caused by pagans, abortionists, feminists, gays, lesbians, the American Civil Liberties Union and the People for the American Way…

…and he thinks Rudy Guiliani is the most qualified person running and should be next President of the United States of America.

Who was the minister who said he'd be called
" home" if he didn't get so much money from his flock? Could Robertson maybe get on that "home" train if he isn't sent a brain, heart or soul-- soon?

OK I said his name once. Never again.

Pat Robertson. He's an idiot. And an asshole.

Hmmmm, intolerance? I accepe that Pat Robertson has the right to his thoughts and opinions. I just don't think he should get paid to broadcast it everywhere.

Has anyone ever drug tested Robertson? Or looked at him for some dementia symptoms? Just sayin'

Then, here's how it's going to go.

Not ONE MUMBLING WORD about MORALITY or VALUES.

Not when you are supporting a man who:

Brought his WHORE into the HOUSE with his WIFE AND CHILDREN.

Has on the payroll a PRIEST accused of MOLESTING CHILDREN.

Not one mumbling word from any of you Bible Thumpers about MORALITY or VALUES.

But he's not. He's a republican who wants the votes of ultra conservative right wing america.

Someone from my hometown radio station has suggested this is because they're both Masons, a blatantly racist organization.

Is this crazy conspiracy talk?

I'm shocked. I thought that Pat was saving his endorsement for his little brother, Ron Paul.

Was Pat Robertson the guy who made the magical WITCH POTION that allowed his old wrinkly ass to "leg lift 2,000 pounds"? And do we believe that bullshit?

All of Robertson's comments hang together in a wing nutty sorta way.

I stopped dead in my tracks yesterday when I read that. Then, after some ponder-ment I realized that it makes perfect sense.

You see, if there's one thing that good ole' holy Pat loves more than burning gays and feminists at the stake, is a great big, all-encompassing, possibly nuclear, war in the Middle East.

And Rudy may well give Pat the best gift ever!

Oi vey, really? I mean atleast its not Brownback as well... right?

Politricks and religion mixing up a new batch of shit near you!!!

This could kill Rudys chances of becoming president.

It would've been better if he said I endorse anyone who isn't a Democrat or at least isn't Hillary.

Is Pat Robertson trying to squeeze out a doody bubble in that photo?

First time coming thru....definitely wont be my last...like the commentary!!

All I have to say is oy vey.

That's because all these holiest rollers are whores for money and power. They don't give a shit about Jesus' teachings, they just care about controlling minds and waging war for profit. They'll endorse any of Satan's minions (and Guiliani is surely part of Hell's royal army) if it can assure them of these results.

Just goes to show you that religious leaders ARE in fact polichickens. If Robertson was true to himself and to his core beliefs, he never heve look Rudy's way. This is a double negative for Rudy (hooray!) with the added falicy of his troubles with Bernie.