A bitch got my groove on to The Queen L.A.T.I.F.A.H. this morning.

A very special thank you to Dr. Lukas for bringing a lovely gift back for C-Money and this bitch from his trip to Mexico. Thank you! I can’t decide whether to put Sudafed or Excedrin in it (wink)!

And much love followed by multitudes of hugs for my brother in vodka, Absolut Billy. Happy birthday to you one more time, m’dear…and thanks for the t-shirt no one else understands! 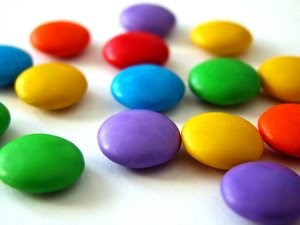 And praise followed by extreme adoration go out to Ryan for scoring this bitch tons of German made Smartie-based joy whilst on vacation. A bitch is going to be illish…but fuck it all if it isn’t worth it.

Moving forward while stuffing my face with Smarties…

A certain student reader of this blog sent this bitch a request for my thoughts on Russia. Madison, who is 17 years old and “going fucking insane over this opinion paper from hell…HELP ME!!", would like to know why Russia gets away with murder (wince) while other countries get called out by the American press and international community for doing pretty much the same thing.

I don't have an answer but I do have some thoughts.
Here goes.

When you were born a bitch was 17 my damned self (my how time flies...wince) and the Soviet Union was about a year away from official dissolution. The Cold War was coming to an end and political pundits were beyond giddy over what they saw as a victory for American style democracy.

Many a conservative gleefully praised the Reagan Administration for bringing about an end to Soviet domination and for maintaining the isolation that allowed for the void through which political opposition was able flourish then ultimately prevail. Most of these folks hoped that a massive wave of freedom would spread across the region liberating oppressed peoples hither and non and bringing light to a world cast for decades in darkness which would blah, blah and more blah.

That was the spin…that the end to Soviet rule equaled the dawn of a democratic world. Regardless of the rumors of corruption and intimidation, no one dare stray from the party line because many a legacy had been linked to it.

Not everyone defines democracy the same way we do and we now know that some governments have democracy tattooed on their left ass cheek but have no plans to remove the hammer and sickle tattoo on their right ass cheek.
But America was claiming mission accomplished before the ink was dry on the Russian Constitution. We sure as shit didn't notice an expiration date because we were busy looking deeply into thyne new BFF's eyes and falling in love again, what were we to do...can't help it, damnit.
Blink.
Anyhoo...go forth and get your opinion on, Madison!

Best of luck on your paper and I look forward to reading it.
at October 08, 2007

I agree with everything a bitch says, and would like add that the reason we're not calling them on their shit now is because they have a sh'load of oil and are big enough to defend it and themselves from predators who want to bring democracy to their country. *cough*

AfroWoman,
Tell that boy about how Russia is no longer our enemy but for a pseudo republic to stand, there must be enemies to rally around that will keep the people on the edge of fear and willing to allow all sorts of transgressions against them by corpo-fascist power mongers in the name of patriotism.
Maybe a lesson in the art of Joseph Geobbels style propaganda would help the young feller out.
(being)SagaciousHillbilly

alright so I gotta give shout outs to my midwest sistah...what the hell is going on chic? first time and highly doubt it will be my last

Ok, first off lemme get some gushing in here about how much I love your blog. Just love it. Read it all the time, talk about it to others, helps me make it through the dreary day, blah blah blah - love it.

Second, the US g'ment helped push the Russians away from *our* definition of democracy when we leaned on Yeltsin to keep the hardcore "freemarket" reforms in place when the parliment was going to slow the pace down (as the population was suffering 2000+% inflation and couldn't buy bread) Since we were pressuring him, he bombed the Parliment - blew it right the hell up. So much for democracy.

I heard a comment the other day, who the hell can remember where - capitalism first killed communism, now it's going after democracy. Sad, yet true.