Lawd, have mercy on those of y’all who travel on a regular basis!

Before I vent this bitch would like to show some love for my fellow bloggers who covered the NAPW Summit with me…Bitch Ph.D., BrownFemiPower, Pandagon and Gymno, Is There No Sin In It and A Bird and a Bottle.

Y’all are the shit and a bitch shall join you to Blog for Choice post travel rant!

A bitch arrived at Atlanta’s massive airport-like complex with bags properly packed and papers in order (Lawd, my ass thought I was in Casablanca for a wee second). The plane was late, but a bitch wasn’t worried because I have a two hour layover in Milwaukee (fantabulous cheese to be scored at the airport there, by the way). Anyhoo, the plane finally arrived and this bitch prepared to board.

Oh but wait…hold on…Delta has overbooked the flight! Mercy, what evah will they do? Why, they’ll make an announcement promising Delta rewards (as if) and hotel vouchers (fuck that, a bitch has a sorta-beagle waiting at home) and all manner of “please allow us to bump you because we overbook every fucking flight out of Atlanta like it’s a commandment from a wrathful travel Gawd”.

Now keep in mind that the plane was already late…and was only made later while the gate attendant begged someone to give up their seat because airlines can get away with the kind of shit other bitnesses can’t…like falsely advertising that they have a produce (the fucking seat) when they are already out of it. This begging went on and on and was joined by other gate-based begging because…well, over-booking is a commandment from the Delta travel Gawd.

Finally the chorus of begging stopped…the begged for people stepped up and the travel Gawd was pleased with the quality of the sacrifice thus the masses were allowed to board!

The flight was uneventful…a bitch caught a nap…and then woke up, checked my watch and realized that we were really pushing it for me to make my connection.

Mercy…but what can you do? This bitch isn’t one to fuss about the unavoidable…even though most of the delay would have been avoidable if Delta were such a greedy little shit.

We landed at 6:50 pm…my plane was scheduled to take off at 7:05 pm just two gates down…we deplaned at 7pm…and the gate was closed, though the plane to St. Louis was still there to mock a bitch.

And I mean CLOSED…not a soul in sight…no gate attendants to be found…SHUT THE FUCK DOWN.

A bitch was calling C-Money to have her check on available flights when a rancid heifer from the dark belly of hell (an American Airlines gate attendant) came forth with.

“You missed your flight!”

A bitch looked at her like she had lost her motherfucking mind and replied… “Because Delta’s greedy ass overbooked and we were delayed and…look, is there another flight?” And she…listen to this shit…she waved her and at me and said that I had to go over to Delta and have them take care of it. Oh, yes! I ain’t lying! Heifer didn’t even lift her eyes to address me like the paying motherfucking customer I am!

Lawd, a bitch was hot… “Thanks for nothing!” I sang as I hobbled back to Delta. The gate keeper there was decent…she hooked a bitch up with a 5:40 am flight in the morning.

Fuck it all to hell and back!

This bitch spent a shitty night in Milwaukee (great town, but raw circumstances) and arrived at the airport at 3:40 am…since the airlines clearly will fuck you over if you’re late and my ass wanted to get the fuck home. I went to American Airlines and approached the ticket counter when it opened at 4 am only to be greeted with…

“What am I supposed to do with that?”

…when I produced my Delta originated paper voucher thing.

“Is there a problem?” I replied.

“Just give it to me and I’ll call Delta. You wouldn’t understand.” She tossed back.

A bitch offered in return…“Ms., I’ve already been fucked over and treated like shit by two airlines, so you don’t have to help them reach their quote of inadequate customer service this morning. Why don’t you tell me what the problem is and we can move on from there?”

She told me, after she regained her composure, that I needed a ticket rather than an itinerary. How hard is that shit to understand? 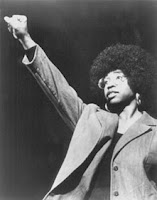 I headed over to the Delta counter to get the paper ticket I should have been given last night…where no one was there…and no one showed up...ever. Finally, I called the 1-800 number, where they confused me with some other Gold Member status woman named AngryBlackBitch and put me through to the phone service the better people get.

Trust that I told them I have never been so frustrated in my life…Delta is on crack and I’m glad they can’t make a profit…and this bitch is not at all satisfied.

Top it off with this bitch being selected for a full pat down high risk security search because of the one way ticket forced on me by The Man’s ineptitude!

At least a bitch got a breast exam out of the experience…
at January 22, 2007

Damn that sounds like a nasty ending to a kickass weekend. Glad you are home safe and sound and great to meet you this weekend. Don't be a stranger and thanks for the blog love!

girl, I had the same shit happening to me!!! i didn't get home until almost 3 in the morning and I was supposed to be home at 9pm!!!!! I got the feel up too--it's nice that they incorporated free health care into our security system.

You've got my sympathies, ABB!

Delta is awful. I mean, all airlines, as you point out, can get away with insane crap in this country, but I had so many bad experiences with Delta that I just refuse to fly with them, no matter how low the fare. There was one night spent in the rattiest possible hotel near D.C., where a party was going on until 3am, because they screwed up one of my connections. They gave me a puny packet of toiletries to "make up" for holding my luggage hostage overnight--and then wanted me to tip the shuttle driver they hired to get me back to the airport. Y'all have got to be kidding!

Delta has been massively overselling and under-serving for years, many of their reps are seriously rude as hell, and their planes are almost always very, very late. I don't feel in the least bit sorry for them in their current financial crisis--it's the kind of thing that ought to happen to people who run their businesses so poorly!

My last flight, returning to Alaska while still weak after surgery, they canceled my flight the first day and I had to call my friend to come get me again and then the next day they ran me around the airport (pulling my carry-on luggage) to try to iron out a problem they were having and the plane didn't board until two hours after it was scheduled to take off. And then the Alaska Airlines flight from Sacramento to Seattle being late, caused me to miss my connection -- the connecting fligt was still there and the person who guards the door was still there, but my seat had been given to someone else when I didn't show, although they knew I was on the flight that was landing when it happened and that I could, in all probability, make it. I had been sent, still dragging my carry on and walking with a cane, on a 15 minute hike to get to this door because my original flight told me that the plane was still boarding and they had called to tell them I was coming. Then, when I stood stunned in front of the person who told me I was out of luck and blurted out, "For this shit I purchased a first class ticket?" I got sent back to the gate I had deplaned at and had to wait six hours for the next flight to Juneau. Which meant I had to call my son to please go feed my cats and the friend who was coming to the airport to pick me up and ask if he could make it at 3 a.m., since I didn't think I could manage to stagger to a cab at that point. And, I got patted down both in Sacramento and Seattle because I'm a fat woman in her 60s and obviously must be patted down so no terrorist will think they are profiling.

I used to love travel. Now I hate it.

1. Wouldn't the ol' pat down inspection be so much more pleasurable if those TSA trolls used ONE OF THESE?

2. Click here for my own (or rather, my in-laws'), lawd-have-mercy-BOHICAfied dealings with an Air France "cuntry-fied" customer (dis)service rep. (The cliffnotes? A 16-18 hour international flight, de-evolved into a 48 odyssey from the innermost, sulfur-tained, sphincter rings of hell.)