This has been one long as hell week and this weekend looks like it’s going to be busy as hell too.

The bitness of being grown is exhausting as hell!

Moving forward with thoughts of political drama swimming through my mind…

This bitch is trying to catch up on all things “Scooter” Libby (damn him to hell and back for sharing a bitch’s nickname for the President…DAMN HIM!!!) and CIA Leak Trial based. I just adore a good conspiracy trial (wink) and Lawd knows this one is shaping out to be an absolute joy.

Some folks are feeling rather blah about the trial…mayhap they were hoping for a more high profile indictment (Cheney of the Duck Motherfucker Cheneys?)…and generally aren’t turned on by the trial of a former advisor to the Vice President on charges that he lied about the leaking of a CIA operative’s name to punish her husband ‘cause he told the truth about something The Man really, really followed by really wanted to lie about.

This bitch advises folks to keep this trial in historical perspective. Third rate crimes have taken down powerful yet corrupt motherfuckers before.

Remember, these aren’t the smartest of people to begin with (wink). 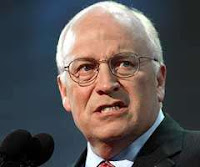 Separate of the legal outcome, this trial is a rare glimpse into the nastified world that is the West Wing.

We have Mr. Libby on trial for lying and obstruction of justice (ouch, did someone skip How to Avoid the Mistakes of Watergate Day at West Wing Camp?).
Mr. Cheney is about to be the called to testify (a bitch predicts he’ll think his subpoena is hogwash).
Mr. Fitzgerald striking immunity deals with alleged co-

conspirators (Ari F., you ought to be ashamed of yourself!).
Accusations of a cover-up (please...oh, please tell me that this president bugged himself).
And allegations that the White House was prepared to sacrifice Mr. Libby to save the brain of the RNC (otherwise known as Mr. Rove).

Heaven to hell and back again, why the fuck isn't this kind of quality programming running in prime time?
at January 26, 2007

What about doing a post on California One Care?