First, a confession…
Something deeply personal and emotional has been weighing on my soul…plaguing a bitch with regret...and a bitch just can’t stand it one more second!

A bitch fell off the non-smoking wagon over the holidays.

But my ass is back on it now…double sob followed by sniffle...and nicotine free once more.

Public confession is a beating and a half. A bitch doesn’t know how you Catholics handle that shit on a regular basis!

Moving forward one day at a time…

This bitch is double checking my Presidential Address to the Nation list of needed things!

But first a bitch needs to get a handle on the pre-address spin.

The morning chat show spinage – The President is in Education and Explanation mode, so anticipate Professor Bush tonight.


ABB’s analysis of this shit- a bitch thinks Scooter B. is still in The Decider mode. Mmhmmm, more along the lines of “Son, all I've ever asked of my Marines is that they obey my orders as they would the word of God.” mode. But we shall see.

CNN is providing Dan Bartlett with a safe space to spin, which has resulted in this pre-address article-esque offering of what will be said tonight.

Lawd, a bitch hasn’t see Danny B. since the mid-terms.


This shit must be serious as hell!

Since that is about all the spin a bitch can tolerate, let us journey onward to the list of needed things! 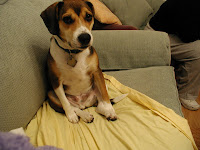 Well, I suppose that will do. Shit, it’s not as if Scooter B.’s speeches last more than 30 minutes!

The Rules of the Game...
What?

I call bullshit on you!

For ever utterance of...
New way forward = 2 points and 1 healthy gulp of vodka cran

Admission that more troops should have been sent earlier = 6 points followed by one shot for a bitch and one for my homies
New course = 2 points and 1 healthy gulp of vodka cran
Political reconciliation = 2 points and 1 healthy gulp vodka cran followed by a cuddle with soothing sorta-beagle
Sectarian violence = 4 points and 1 shot vodka
War on terror = 4 points and 1 shot vodka (Lawd, how the hell do you fight a war against an emotion?)
Evil doers = 6 points A bitch isn’t expecting this one, but if he drops it we’ll have to give that 2 shots vodka followed by another cuddle with Betsey the soothing sorta-beagle

Other utterances worthy of vodka shots:

Our strategy is to win = 2 points. No, that is what people in other parts of the world call a "goal." 1 lemon drop. (Fave vodka shot ever.)

Islamofascist = 1 point. 1 lemon drop for each instance of this tired phrase.

If I hadn't made a New Year's resolution not to except on weekends, I'd be playing the game this year. Without medication, I don't think I can sit through it.

Cripes. How's your liver these days? By my count, you're going to hit 12 shots plus about 4 vodka crans. Don't forget the aspirin!

I don't think I can play this game. I fall asleep midway through the second beer; I'd be afraid I was going to die of alcohol poisoning if I played. I do agree, though, that drunk may be the only way to stand this shit.

Yeah, that may be the flaw in this scoring system...a bitch's liver.

Mayhap I'll spread them out over a few days...'cause you know they'll be spinning through Sunday!

A presidential speech drinking game.
Another reason why you are a queen goddess : )

You are such a saint to watch him speechify!