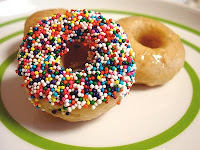 I watched the news today (brutal) and then read my email (some good stuff followed by multiple comment attempts by some rancid racist knaves with more time than common sense) and…well, I was left feeling that the world has gone to shit.

But then I saw news about National Doughnut Day scroll past on the telly.

No, that won’t fix the fubar in the Gulf…it won’t cure knavish trolls of their racism or cut off their internet access…and it won’t bring about peace in the Middle East.

But National Doughnut Day will give this bitch an excuse to eat a sometimes food…and that’s a good thing.

I’m going to get my eat on, damn it and savor the simple joy of deciding between a cake doughnut or a jelly filled one…

…and put thoughts of that giant sinkhole in Guatemala sucking all the assholes of the world into the bowels of Earth (sigh) aside for as long as it takes to inhale deep fried sugar coated dough.

Not sure it's an option in that gateway city to the west, but here in the uber liberal east (way north of the sweet tea line), DDs is offering a "free" donut with any drink purchase. And "free" is the one thing all bitches agree on! Happy donut day!

I actually am living half a mile away from that sinkhole! It's smaller than the one that opened in some years ago (I wasn't here then). They happen in Florida a lot, but never as big as these. Isn't it the strangest crap ever? My heart breaking for Louisiana and the BP spill though, I'm from New Orleans, born and bred ... that oil crap expanding all around will have long and wide repercussions.