Massachusetts, go get your vote on!

A bitch is more than a little stunned by the election drama in Massachusetts today to fill the seat of the last Senator Kennedy. 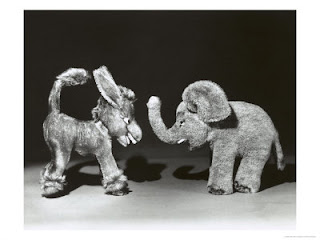 And if I was freaked out by the fact that health care reform was being held prisoner by one vote in the Senate, I’m beside my damn self by the prospect of health care reform being derailed by the potential vote of a certain Mr. Brown should he win the election today.

Gawd, what a clusterfuck of monumental proportions?!?

All I can say is that folks in Massachusetts need to get your vote on.

But damn it all the hell and back, I can’t believe it has come to this…to Dems struggling to hold a senate seat in Massachusetts.

Ugh…followed by SHIT!..followed by another call for folks to get their vote on.

Something tells me that even if we had a 90% Dem. majority, this would do nothing for the people of this country.

Coakley ran a nonexistent campaign. She was beyond overconfident that "the Kennedy seat" would remain Democratic.

When she did finally stop phoning it in, she ran a negative campaign.

I'd hate to see it happen, but she deserves to lose this one.

Either way Mass folks need to vote. This isn't one I'd want to say I let pass my suffrage having ass by!

As to that, the poll numbers are high even considering the bad weather.

There's some disagreement over which candidate high voter turnout favors more, so I guess we get to wait and see on that.

Hell, with y'all keeping me posted I won't need to suffer through CNN (wink)!

If it goes to a recount, it's bad news. Over 100,000 absentee ballots were requested, and they usually swing more conservatively.

I hope she proves to be a better Senator than candidate, assuming she wins.

There's an excellent diary up on Dkos that argues that this loss is due to a circular firing squad in the Democratic primary. Which unfortunately is all too familiar everywhere.