Specifically, Rudy G.’s flight had already taken off when his illishness escalated and they were forced to turn around, land and take his sick ass to the hospital.

As if St. Louis needs another sick ass panderific Republican hypocrite, even if it’s only for a few hours.

Anyhoo, what I find amazing is that Rudy landed in St. Louis County (Chesterfield isn't near the city) but they drove his ill ass 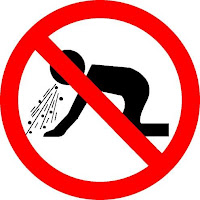 all the way into my ‘hood so he could get his sick on at Barnes-Jewish. They had to pass St. Johns Mercy and Missouri Baptist hospital to get all the way to Barnes…which doesn’t make a whole lot of sense if Rudy was ill enough to warrant turning around after taking off.

Sick Ass Rudy G. Conspiracy Theory #1
Rudy G. was refused service at St. Johns Mercy at the request of Archbishop Raymond Burke, who demanded that Giuliani renounce all things GLBT…in Latin…followed by several hours of prayer before allowing him treatment.

Sick Ass Rudy G. Conspiracy Theory #2
Missouri Baptist hospital, empowered by the religious practitioner movement that is taking root Missouri, was willing to admit Rudy Giuliani but only if he signed a clause stating that should he become pregnant he would carry the baby to term.

If you lived here that wouldn’t sound crazy.

Sick Ass Rudy G. Conspiracy Theory #3
Rudy, alarmed by his new dismal poll numbers, had to be forced to get on the flight and return to the early primary states. His tantrum was so severe that they were forced to turn around and make up some bullshit story about him projectile vomiting like it was going out of style.

Knowing that the traffic on Highway 40 would buy them at least an hour to calm their candidate down, staffers made for Barnes-Jewish in St. Louis city.

Or maybe this was just some sorry ass stunt to drag attention away from Iowa, Huckabee and the two tons of scandalacious drama Giuliani 2008 is currently dragging everywhere he campaigns.

If he's sick, then Kim Porter is a self-respecting woman.

That said, I have some OT's to drop for you.

2. Bob Kerrey did the bullshit apology.

3. Flipping Mitt f#*$ing LIED about his father and MLK. LIED about MLK!

A person who types "anywhoo" has no room to speculate anything. What a waste of your time and mine. You made no sense. Change the "Angry" to "Typically Stupid"

Let's see if you have the balls to post this.

That was Anyhoo, motherfucker...not anywho.

And I don't require balls to tell you to kiss off, son.

SARGCT #5
Giuliani just wants to be near you!

SARGCT #6
He read you and realized the merciless rod of correction awaits him.

OR.... it could be that Barnes-Jewish was the hospital best located for the majority of his stay.

I'm sure his security had that hopsital staged before he ever hit down.

I clicked on the link about the religious practitioner movement.

Ok, so I figure that if this shit really takes off then we really are all in hell.

Course, the number of times this proud dyke was treated like shit from a gyn, an MD or a nurse, I guess I have been in healthcare hell for a long time now.

Shame that the straight women havta join us in it instead of things getting better.

I hadn't realized that "America's Mayor" had landed out in Chesterfield. I think that's because when I hear "Chesterfield" I really hear "Off the map, here they be monsters." I mean...is there really more than a dirt landing strip out there? Is there really life on the other side of I-270? It does get a little redder the further you go from the river.

Anyhoo (heheh,) we were listening to the local news when they talked about this and when Barnes was mentioned, all 3 of my spawn said, in unison: "That's where we were born!" It is, after all, one of the top hospitals in the nation. Maybe that's why Rudy went there?

bev...
I'm pretty sure it was because Barnes-Jewish kicks ass too (wink).

A bitch is beyond lucky to have them less than 10 minutes away!

As for Chesterfield, the last time I drove through the place was freakishly built up and Wal-Marted (shudder.

Reminded me of a John Hughes movie set gone bad...

Voice of Reason...
Who are you trying to school?

Damn, honey you should take pill...stat!

If you thought my speculations were serious you sure as shit need one (wink).

I'm sorry. I just couldn't resist the urge to potentially piss of Sounds like Prick--er, I mean Nick.

What? No one ever said I was nice.

You left out St. Luke's. He'da passed it first. And you can see it from the highway.

Aw, duckies, don't be hatin' on Chesterberg. They just cain't help themselves -- all that loverly lucre tossed their way, and all they gotta do is issue building permits. Justice Post is spinnin' in his grave: the first perpetual motion machine.

Besides, they outlawed biz jets (read: raised the landing fees so nobody could afford them, to limit traffic) at Lambert a gazillion years ago. Jeebus himself couldn't land there in a Gulfstream...

Sick Ass Rudy G. Conspiracy Theory #4 -
The hormones from Rudy's Post Op sex change are kicking in wildly and forced him into the Transgender ward for a while.