Entertaining whilst broke and an easy as hell recipe…

ABCNews.com has a story up about how Americans are staying home…and knitting, cooking and playing Scrabble…as a result of the recession.

Well, those of us who have been…um, budgeted…for years have long known the joys of home-based entertainment!

A bitch adores a comfort-food dinner with friends and I can’t say enough about the particular joy of slow cooked yumminess. 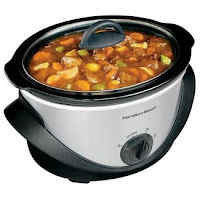 So, the news that there is a slow cooker recipe contest was beyond exciting!

Anyhoo, if there is an upside to this economic drama it may be that some folks are rediscovering their house and the kitchen in it.

What you need…
A pot roast
An onion
Black pepper
Salt or seasoning if blood pressure is an issue (sigh)
Worcestershire sauce
A slow cooker
Vegetables (optional, because a bitch prefers smashed taters as a side)

What to do with all that shit...
Salt or season and pepper the roast to taste
Put that thang in the slow cooker…on low
Add sliced onions on top
Dash it up with several shakes of Worstershire sauce
Put the lid on

And leave it alone to get its cook on for…um, 10 hours.

Invite others to bring sides and something sweet...it will cut down on costs while adding extra yummification to the meal.

Ooooo, I love a good slow cooker recipe! When I throw a party, I like to show off, but the hubby would rather have some chicken wings, so for his 40th b-day, I made him some Buffalo Chicken Dip in a crock pot.

Throw everything but about half the cheese in the slow cooker on high until it all melts together. Turn the cooker down to Warm, sprinkle the rest of the cheese on top, and serve with celery sticks and some Chicken in a Biskit crackers. Tastes just like wings without the mess!

You mean people didn't stay home and play scrabble before the recession? Well now I feel so ahead of the times!

A love a crockpot recipe!!! It makes it so easy and it taste so good.

Remind me to give a Bitch my recipe for slow cooker Hotter than Hell vegan (if you leave off the cheese and sour cream, but who'd want to do that?) chili. It's insanely easy. Ooh, I may have to make it this Friday for our ritual BSG viewing....

If you have the time, take an extra ten minutes to brown that sucker in a hot skillet before you continue with the rest of your recipe, you wont regret it. I do stew meat in a similar recipe too. Anything to save time and costs!