A bitch plans to get my write on this weekend and invest some time in my much neglected book.

Oh well…nothing to do but pick up thy pen!

A certain bitter assed knavish troll sent this bitch a question via e-mail. Said knave-based troll expressed concern that a bitch will not be able to go on now that “my people” have taken control and are free to “ruin” America. 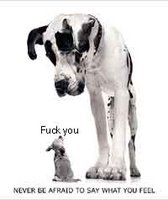 “My people” have yet to take control, son. Unless a bitch missed something Tuesday night and angry black women swept into the majority...and a bitch is doubtful I’d miss that shit…Congress is still populated by wealthy straight (on paper) white men.

When government is populated by the faithful of the United Church of Bitchitude and Latter Day Drunks you’ll feel that shit in your bones…trust a bitch.

The fine art of bitchitude is still practiced here!

Mmhmmm, there is plenty of shit left to do.

State politics (still fucked up), city political drama (only not fucked up in comparison to the fucktitude of the Missouri state shit), the Missouri Department of Mental Health (quick to trifle and slow to come correct), our on-going battle to protect and defend choice (ugh, talk about a multi-front war), education reform (nice campaign issue, but a pain in the ass to deliver on), anti-bullying legislation (needed BIG TIME in Missouri), civil rights protection (because folks get fired, denied housing and discriminated against all the time) and all manner of domestic policy shit that has been neglected or fucked up from the floor up by The Man.

I’ll shut up when the job gets done, motherfucker.

On a much lighter note...

The St. Louis International Film Festival is going down, chil’ren!

This bitch plans to view all manner of movies.

My ass is most looking forward to FUCK directed by Steve Anderson and Son of Man directed by Mark Dornford-May.

For Unlawful Carnal Knowledge is how I learned it....anyway a whole movie about my favorite word....

good to see the bitch is still in control!

I pray for the day to come soo when members of The Church of Bitchitude and Latter Day Drunks take Congress. Let's begin the campaign now and plan on a takeover in the 2012 elections. We can make it happen.

It’s mysterious to me why some of your readers feel at liberty to harass via e-mail and/or comments. If you don’t like a blog’s content, simply move along. Though I might like such a law, nothing requires people to read ABB. Microsoft hasn’t announced that all their software will automatically open with ABB as their homepage, have they?

Trashing people on their blogs always strikes me as the same as being invited into somebody’s living room and then deciding to pee on the couch.

I've dealt with a troll or two at a time. These are people who would never dare to say things to people's faces. They are cowards.
Be sure to congratulate yourself for all the work you did to get out the vote! It made a huge difference. Now enjoy your movies. Have fun. Rejoice, even!
Bitch, I'm going to be a bitch too and steal the doggie pic for my blog. I love it.

I'm fairly certain "your people" haven't taken over, otherwise, I would be in a far better mood, because your people are definitely my kind of people. See, now your anonymous e-mailer got me thinking about having a guv'ment run by a group of Angry Black Bitches, and now I'm all depressed that it isn't happening. Sigh.

Mama, thank you for always being on point.

I await the day when women across this nation are valued more than not. I await the day when politicians/government is really accountable to 'the people' for their actions, or lack thereof;and for their decisions, informed or not. It would be a glorious day when 'your people' were in power. And I would be proud to be among them.

I await the day we are properly 'ruined'.

Here in Alaska we are also aware that the state didn't keep up with the nation. I live in the only liberal precinct in the entire state. We elected a bunch of Republicans to our state offices and re-elected one to the House, but my precinct followed the national trend exactly.

Miles to go before we sleep.

GayProf, I think it comes from feeling intimidated. Seeing something in print/online has made me feel the writer was an authority. Jerkfaced or abusive or violent comments therefore make me think the commenter/e-mailer feels (s)he must do something to not necessarily change the blogger, but to fight the feeling that said blogger is an authority figure.

I don't know what to make of the ones that keep telling ABB not to use the word "bitch," however.

//I’ll shut up when the job gets done, motherfucker.//

My new favorite phrase of the day is "quick to trifle and slow to come correct." I think I must have (with your permission) one of my characters say that at some point.

And now that you mention it, the day that the true American majority (that would be women, :wink:) has the power it deserves, it will be a good day indeed.

Well, on first reading this, I felt like Christopher, sad at how untrue the troll's words were. Then I thought, you've obviously really struck a chord to make the troll so pissy, and the fact that conservatives are so angry means that something big did in fact go down last Tuesday. So, the troll's bitterness should make us rejoice!

Well written as always. And I could NOT agree with you more.